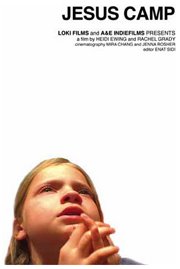 Almost a year ago, I wrote about the movie, Jesus Camp. The film must have taken the proverbial "slow boat" to get to S'pore because Milady and I only got our first chance to watch the movie at the theater this past weekend.

The movie was more or less everything I expected. The scenes with Ted Haggard were unintentionally amusing due to his hypocrisy, revealed by his scandal last year involving the gay prostitute. I could sympathize somewhat with the main characters; theologically, there are some similarities between what these evangelical Christians believe and what we Muslims believe.

I came away from the movie somewhat saddened, though; here is a group of people who have, IMO, debased a religion, saddling it with nationalism, militarism, sedition against their own government (the cup breaking scene), but also praising the President to the point where it bordered on idol worship. (I thought I saw a scene where the kids were bowing down to the cardboard image of President Bush; perhaps that was in the trailers. I expected to see it in the movie but didn't.) And then, of course, there is the politicizing of the children, the adults using them as pawns with regard to issues they don't necessarily understand.

Becky Fisher, the woman whom the movie revolves around, loves her American culture yet realizes that things there aren't right. And while there are many problems in American culture, I have to wonder if most of her discomfort was brought upon by herself.
Posted by JDsg at 8/28/2007 02:59:00 PM