On Shari'ah and American Politics

Recently, Oklahoma state senator Rex Duncan proposed "a ballot measure that would prohibit courts from considering international or sharia law when deciding cases. He says the measure is a 'preemptive strike' against 'liberal judges' who want to 'undermine those founding principles' of America."  The proposition is a glaring example of wingnuttery at its worst but, to add fuel to the fire, another person asked the question, "What is 'liberal' about Sharia law?"

This is my response to that question.

Shari'ah is neither "liberal" nor "conservative."  It is a codification of Islamic rules and regulations on topics that are both discussed in the Qur'an and Sunnah of the Prophet (pbuh) and on topics that are not discussed directly but are derived from fundamental principles (for example, much of Shari'ah law on Islamic finance is derived from principles such as the ban on usury (interest)).  Whether Shari'ah matches up with American liberal or conservative political thought is not a concern to most Muslim jurists... or most Muslims for that matter.  Muslims think of Islam as the middle path, a religion that tries to avoid the extremes.  And while some positions within Shari'ah match up with what American conservatives believe in, other positions match up with what American liberals believe in.

Trying to prevent Shari'ah from being used as a code of law is like trying to prevent water from doing what it does.  Non-Muslims can try to channel Shari'ah away or dam it up, but Shari'ah finds its own way.  Muslims use Shari'ah without the consent of non-Muslims as much of Shari'ah is simply the rules of conduct Muslims use between themselves in their day-to-day lives.  It is largely only within certain issues (e.g., family issues, such as marriage, divorce and inheritance) that Muslims want to incorporate Shari'ah within the existing legal frameworks.  That some non-Muslims want to prevent this from happening only speaks to their ignorance about Shari'ah and Islam.
Posted by JDsg at 6/18/2010 11:25:00 AM 4 comments: 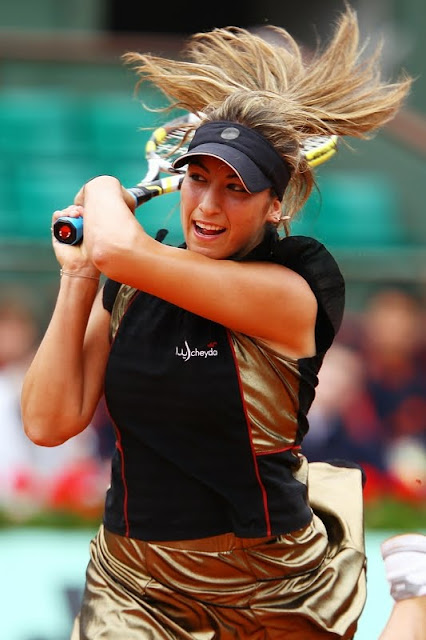 A couple weeks ago a big stir was made over Rimah Fakih's being crowned Miss USA. But I was a little surprised that no one in the Muslim blogosphere (those few of us who are left) brought up the success story of French tennis player Aravane Rezai.

I first started noticing Aravane a few months ago. Currently ranked #19 in the world (her highest ranking is #16), she is one of several Muslim tennis players playing professionally today. (Another is Sania Mirza of India.) Aravane was born in France to Iranian parents, and competed for Iran in the Women's Islamic Games, winning gold medals in 2001 and 2005.

Aravane is known for a very powerful forehand shot (she puts a lot of muscle behind the ball), and recently had the biggest win in her career at the Mutua Madrilena Madrid Open, in which she upset Justine Henin, Jelena Janković and Venus Williams to win the clay court title. Unfortunately, she wasn't able to follow up that success in the French Open (where she lost in the third round); however, she reached the semifinals of the Aegon Classic, and has just defeated the number one-seed and last year's champion, Caroline Wozniacki, in the Aegon International (two grass court tournaments preparatory to Wimbeldon).

So, if you want to encourage Muslim girls with a better role model than a beauty queen, a tennis player like Aravane Rezai might make for a better choice, insha'allah.
Posted by JDsg at 6/16/2010 12:25:00 PM 1 comment:

Alhamdulillah! This video is soooo wonderful, even yours truly nearly cried at the sight of eight-month-old Jonathan, deaf since birth, hearing his mother's voice for the first time.

My favorite artist, Alan Parsons, continues to keep active in writing and performing new music. Two new songs have just been released (so new that I'm listening to the songs for the very first time as I write this): All Our Yesterdays and Alpha Centauri. The latter song, unsurprisingly, has a sound reminiscent to Parsons' mammothly popular song from 1982, Sirius.

The British may have left Singapore years ago (in 1976, to be exact), but that doesn't mean that Singaporeans don't wish they were British. British influence and culture is deeply pervasive here, and no where is that more apparent than in the Singaporean addiction to the English Premier League. So it was hardly a surprise to see Robert Green's blunder in the World Cup match against the United States on the front pages of various newspapers here.


I don't know if anyone else has made the comparison, but Green's screw-up reminded me of David Seaman missing Ronaldinho's free kick in England's 2002 World Cup match against Brazil.


For my soccer-illiterate compatriots back in the United States, these momentary lapses in concentration are similar to that made by Bill Buckner of the Boston Red Sox back in the 1986 World Series.

Who Wants to Be an Imam? 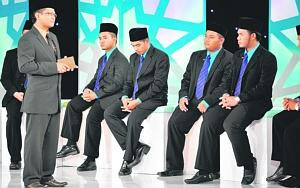 There was an interesting article in yesterday's (7 June 2010) Straits Times about a television show up in Malaysia called Imam Muda ("Young Imam"). The Malaysian channel Astro Oasis (which we don't get here in Singapore) has created an Apprentice-type show in which ten young men, ages 19 to 27, compete to become employed as an imam.

Each aspiring imam on the show is given a task each week, and tested on his Islamic theory and practical applications, as well as leadership qualities until only one contestant remains.

The first task the men had to do was perhaps the most emotionally demanding: cleaning and burying a dead body according to Muslim rites. In this particular case, the body was that of a man who had died of AIDS; the body had been lying in the morgue for a month because no one had claimed the body by that time. (While it is certainly possible the deceased's family did not claim the body for fear of contracting the HIV virus during the cleaning of the body, which frequently is done in the family's bathroom, it's also possible that this particular victim did not have any surviving family. Allahu alim [God knows best]. It should also be noted that religious mentors and forensic officers were on-hand for the cleaning and burial to supervise the potential imams.)

The channel manager, Izelan Basar, said of this particular task:

"We believed if the contestant could face the dead body and burial process, then obviously they could face any other task in life as Muslims."

This is very true, IMO, but it also highlights the fact that the job of imam is much more than just leading prayers. In many ways, the imam has a similar occupation to that of a priest, minister or rabbi in that he needs to provide pastoral care, in whatever capacity that may take, to the people who attend his masjid. (One imam I know has talked of having performed several exorcisms.) Other tasks the contestants will face in future weeks include delivering sermons in real mosques, and visiting women's shelters and sites where unwanted babies are taken (presumably orphanages, but the word is not used in the article).

This video's being passed around various drum corps alumni over at Facebook. As the junior corps activity slowly fades away due to the excessive tinkering of drum corps directors who can't leave well enough alone ("If it ain't broke...") and the exorbitant costs from corps needing to tour coast-to-coast each summer, I thought it would be nice to share a video from a time (1979) when the junior corps activity was still robust and the brass instruments were still bugles, which are designed to project sound outdoors, instead of using wimpy B♭ horns that require amplification for the audience to hear the music.
The corps in this video are the Santa Clara Vanguard, Phantom Regiment, 27th Lancers, the Bridgemen, Blue Devils, and Spirit of Atlanta.