In the Courtyard of the Beloved

IN THE COURTYARD OF THE BELOVED is a visual and aural portrait of Nizamuddin Auliya Dargah, a Sufi shrine in New Delhi, India. Made from over 18,000 still images and ambient sounds recorded on-site, rapid-fire bursts of kaleidoscopic imagery assemble into fractured collages where a moment expands outwards and then converges back into itself, fleshing out a three-dimensional rendering of place.

Each day, hundreds of pilgrims travel by airplane, train, car, rickshaw and foot to reach this shrine, which honors a 12th century Sufi mystic who believed in drawing close to God through renunciation of the world and service to humanity. Beginning with imagery from these journeys, the film then enters the physical space of the shrine; a unique nexus of marketplace, social space and spiritual haven, where devotees come to offer their prayers and find a moment of reflection away from the din of Delhi traffic. As the sun sets behind the dome, musicians begin the qawwali, a style of Sufi devotional music that ranges from contemplative religious elegy to raucous crescendo.

An interesting article on doubt and advocacy: the more one doubts, the more one advocates his or her position in an effort to convince one's self in the rightness of his or her beliefs. The case example is the tea baggers:

If confidence in one’s core tenets becomes shaky, a common response is to proselytize all the more vigorously. The apparent reason ... is that advocacy on behalf of one’s beliefs helps banish any uncomfortable lack of certainty. “Although it is natural to assume that a persistent and enthusiastic advocate of a belief is brimming with confidence ... the advocacy might in fact signal that the individual is boiling over with doubt.”

On October 4, 2010, a million cubic meters (35 million cubic feet) of red sludge spilled from a reservoir at an alumina plant in Ajka in western Hungary. Four people were killed and about 100 injured.* The sludge entered the Marcal River and has reached the Danube. Aquatic life in the Marcal was severely harmed; the mud also caused significant damage in nearby villages and towns, as well as adjacent farmland.

On October 11, when the Advanced Spaceborne Thermal Emission and Reflection Radiometer (ASTER) instrument on NASA's Terra spacecraft captured this image, the reservoir breach and downstream flow of the red sludge were still prominently visible. The ASTER image is located at 47.1 degrees north latitude, 17.5 degrees east longitude. The image covers an area of 14 by 34 kilometers (8.9 by 21 miles).

* At the time of this posting, the death toll has risen to eight; 45 people are currently hospitalized, with two in very serious condition. (Source)

Update:  One of the towns affected by this disaster has made the best of their recovery efforts; see  Eco-Friendly Makeover for Hungarian Village.

Why It's Time to Panic 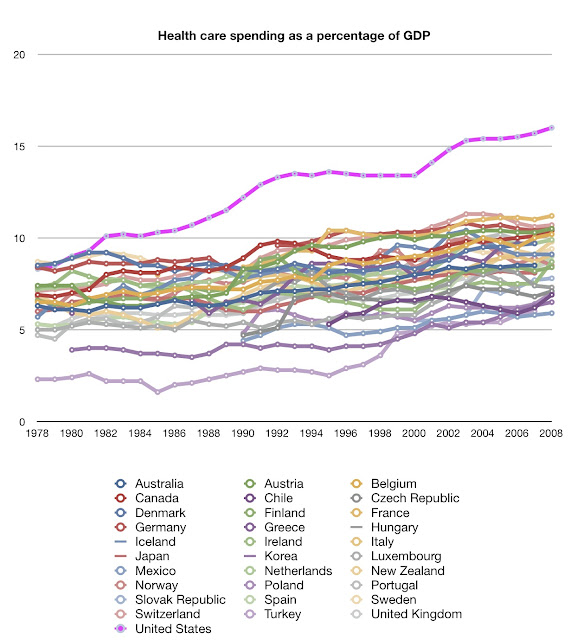 If you didn't figure out that last year's uproar over the health care reform law was motivated by greed, this graph will set you straight. The piece of the pie with respect to health care in the United States (taken by hospitals, doctors, insurance companies and pharmaceutical companies, among others) has grown so big as a percentage of US GDP, it should come as no surprise why those with vested interests tried to keep health care reform from becoming a reality.

Remember that elections count and that the GOP not only wants to repeal health care reform, but replace it with something that won't help individuals and families. The GOP isn't interested in your welfare; they're interested in corporations' welfare. Vote for the Democrats this November.

Self-Identification as a Muslim

I've had an odd conversation with someone on Daily Kos, the topic of which was one's self-identification with a particular religion, in this case, Islam. The original comment read, in part:

I don't think that any Muslims have authority to tell another Muslim that he's not a Muslim if he believes he is. I think each person has a right to determine his own religion.

My original response to this was the following:

Muslims can and do have the authority to tell another person that he or she is not a Muslim. Granted, this power should be used rarely, if at all. However, self-identification as a Muslim is not accepted within the Muslim community, and in some countries, such as Singapore, Muslim converts are tested as to their knowledge and practices of Islam before they are officially registered as a Muslim.

There are several reasons why self-identification is not allowed in Islam. One reason is because there are some groups, such as the Ahmadiyya, who are deviant offshoots of Islam who wish to be recognized as part of the greater Muslim community. The Ahmadiyya fail in this test because they have some beliefs regarding their founder that go against Muslim beliefs (specifically, against the Qur'an). Despite their wish to self-identify as Muslims, orthodox Muslims do not recognize the Ahmadiyya as part of the Islamic community.

A second reason is because some people wish to infiltrate the Muslim community by pretending to be Muslims. A recent case of this happened last year, when Chris Gaubatz [also see here] pretended to be a Muslim in order to obtain an internship at CAIR, where he stole thousands of pages of documents. (The most "damning" thing the documents spoke of was CAIR's goal of trying to get as many Muslims placed as Congressional interns as possible. The right tried to make hay of the story, but were ridiculed by virtually every group that has some sort of political interest, where they all agreed that they too had the same goal.)

Because of these and other concerns, Muslims don't accept self-identification. A person may self-identify as a Muslim, and they may truly be Muslim (only Allah (swt) actually knows what is in his or her heart), but that doesn't mean that we, the Muslim community, have to take their word for it. As with many other religious claims, we would tell that person, "Prove it!"

To which that person responded:

You may not care but that's not how it's going to be among Muslims. One person's opinion is not going to trump a consensus opinion among both Muslim scholars and non-scholars based upon 1400 years of experience. We have our reasons, as I mentioned above, and I believe them to be good reasons.

To be sure, as I also mentioned above, the naming of a person or group as a takfir (an apostate) is an act that is fraught with peril for the person who does so, as I wrote about on one of my blogs (Why Muslims Don't Pronounce "Takfir"). However, the minimum requirement to be accepted as a Muslim among Muslims is a public declaration of the shahadah in front of two Muslims. But even there, it is still possible for someone who does not have the proper intentions to deceive. Hence, our rejection of self-identification.

To which that person replied:

OK, I still don't care. If someone raised a Muslim decides he's an Atheist or a Christian or whatever, that's what he is. I think all of these regulations on who gets to count as a Jew, Muslim, Christian, etc... are offensive and illiberal.

My final comments are:

If someone raised a Muslim decides he's an Atheist or a Christian or whatever, that's what he is.

Which is fine by me. I'm not arguing this point.

I think all of these regulations on who gets to count as a Jew, Muslim, Christian, etc... are offensive and illiberal.

That's your opinion, and you're welcome to it. There's nothing to stop a person from self-identifying or becoming a Muslim, but that doesn't mean that the Muslim community must recognize that person as a Muslim. If that's "offensive and illiberal" so be it. The Muslim community expects certain standards to be met in terms of both beliefs and practices. Muslims themselves may fall into and out of a state of Islam throughout their lives (although we do, of course, hope to die in a state of Islam when that time comes, insha'allah). It's not terribly difficult to be recognized by other Muslims as a Muslim, but we do follow our rules, not the rules other people think we should follow.
Posted by JDsg at 10/05/2010 03:58:00 PM 6 comments: