I came across this story earlier today about arranged marriages. I know a lot of Americans have a negative attitude toward arranged marriages, which I attribute largely to culture shock, having the idea that the only way one can marry is through love and any other reason is largely anathema. However, as the article points out, even Western cultures practiced arranged marriages up through about 200 years ago:

Worldwide, families of many religions have arranged marriages throughout history as a way to strengthen the community or join families for economic, political or social positioning.

Even in Western European society, arranged marriages were the norm until the late 1700s, when "personal choice of partners had replaced arranged marriages as a social ideal, and individuals were encouraged to marry for love," according to Stephanie Coontz, author of "Marriage, a History."

Personally, I don't have a problem with arranged marriages although I will admit that Milady and I didn't have our marriage arranged. Without getting into the details of how we met or why we married, I will say that it did take us some time to adjust to living with each other, which is an important key to the success of any marriage. Part of our problem, of course, was that we came from two very different cultures and lifestyles. It took us some time to work through our differences, but we have managed to make our marriage a happy one. Like the couple mentioned in the article (two children in 12 years of marriage), we have been married for over eight years now and have our wonderful daughter. (I will also add that what really helped our relationship is that we both have similar goals and values; for example, we both wanted to have children, and we both believed very strongly in living by and raising our child with Islamic values.)

One point the article made that I wasn't aware of is that Orthodox Jews also have similar attitudes with Muslims toward dating:

In Jewish Orthodox practice, dating in the Western sense is prohibited. Young couples are discouraged from being left alone before marriage.

"You don't go out to private places," said Rabbi Avi Finegold, a Chicago educator who describes himself as Orthodox but also acknowledges being skeptical about the success of arranged marriages.

The Orthodox community favors using hotel lobbies and New York's Times Square for public meetings between the sexes, he said. "You will see the guy dressed in his finest and the girl all prim and proper and they are not touching each other, and are in a public place," Finegold said.

The next time someone complains that Muslims don't date, we should point out to that person that Orthodox Jews follow the same practice.
Posted by JDsg at 7/30/2011 12:07:00 AM No comments: 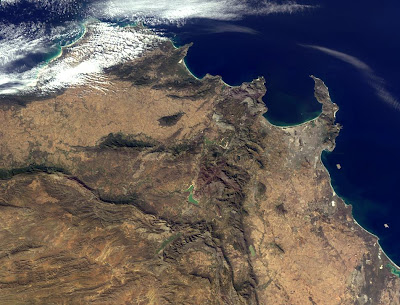 Welcome back to another chance to play geographical detective!

This image was taken by the Multi-angle Imaging SpectroRadiometer (MISR), and represents an area of about 1800 kilometers by 900 kilometers. Please note that due North may not be at the top of the page. These questions refer to a landmark, area or province within the pictured region. Please answer the questions below and tell us where on Earth you think the location is. You may use any reference materials you like to answer the quiz.

From the statements below, please indicate which are TRUE and which are FALSE.

1. Located within the lower third of the image is a dramatic landmark that has lain dormant for thousands of years.

2. The southwest part of the region pictured overlooks a capital city.

3. This area was once rich in biodiversity. However, urbanization over the past several decades has reduced the wealth of flora and fauna in the region by nearly 30 percent.

4. One of the seven natural wonders of the world lies to the northeast of this region, less than a week away by car.

5. The highest point in this region, located near the peninsula shown in the image, was first successfully climbed in the 16th century, according to records.

6. The country in which this region is located is home to one of the world's largest (by volume) rivers.

7. On the west coast of the region pictured lies a World Heritage Site surrounded by water.

What location is shown in this image?

Send us your answers, name (initials are acceptable if you prefer), and your hometown by the quiz deadline of Wednesday, August 3, 2011, using the Quiz answer form. Answers will be published on the MISR web site. The names and home towns of respondents who answer all questions correctly by the deadline will also be published in the order responses were received. The first 3 people on this list who are not affiliated with NASA, JPL, or MISR and who have not previously won a prize will be sent a print of the image.

A new "Where on Earth...?" mystery will appear periodically. The image also appears on the Earth Observatory, http://earthobservatory.nasa.gov/, and on the Atmospheric Sciences Data Center home pages, http://eosweb.larc.nasa.gov/, though usually with a several-hour delay.

The Scourge of Peak Oil

An interesting article from Al-Jazeera on peak oil.  The fact that we, humanity, are coming to the peak in oil production worldwide is not surprising to me.  What makes this article interesting, though, are the sections that describe how lifestyles, especially in Western countries are going to change.  Some excerpts:


Whipple is blunt about what life will look like in a post-peak oil world.

"You're going to see major changes in industrial civilisation," he said, adding that he expects oil to once again approach $150 per barrel in the next 18 months. "In the US, where we aren't used to paying $10 for a gallon of gas like they do in Germany, that [$150 per barrel of oil] will really slow things down."

He believes discretionary driving will basically stop, and added: "Anything with a parking lot out front is going to be in trouble."

"It [peak oil] is a crisis in the sense that someone is going to have to change their expectations about mobility, and the idea that anyone can go anywhere is unlikely to continue. Sooner or later, people are going to start wondering how they will get from place to place without their cars."

Due to rising fuel costs, Perl sees flying becoming less of an option for the global population.

"I tell people to go to their favourite travel website like Expedia, and pick your destination and dates, and hit the fare selector for first class, because that's the price it will be in the future for travelling. And ask yourself if you will make the trip. Flying cheap will no longer exist as an option."

Professor Michael Bomford, a research scientist at Kentucky State University, said that, in the US, far more energy is used when food leaves the farm than the amount of energy required to grow it.

Evidence of this is clear.

Wheat nearly doubled in cost during the past twelve months, as Russia and Ukraine cut exports after droughts decimated crops. The UN estimates nations will spend $1.29 trillion on food imports this year alone, making it the most money spent on imports in one year, and a 21 per cent increase over 2010.

"Every time the economy starts to recover it pushes [the price of] oil up, and then the economy falters," he said, "We're damned if we do and damned if we don't. If oil price declines, it is because the economy is in the toilet. Global oil scarcity has triggered the limits to growth scenario and we've seen the last of economic growth as we know it, at least in the US."

The fact of the matter is that unconstrained capitalism as the primary worldwide business model based on continuing growth will ultimately need to be replaced by a lower-growth model that recognizes and works within the constraints provided by natural resources. This is not just an energy issue, but is also going to include issues such as food and clean water. "Business as usual" just isn't going to cut it anymore.
Posted by JDsg at 7/27/2011 06:26:00 PM No comments: