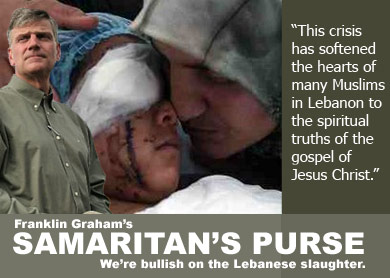 As you might expect, Samaritan's Purse, the Christian organization run by Franklin Graham (of "(Islam is a) very evil and a very wicked religion" infamy) has been exploiting the war in Lebanon to proselytize:

Samaritan's Purse has continued to reach out through its partners to the war-devastated people of southern Lebanon. "Right now," [Ken] Isaacs notes, "we're supporting a network of six pastors and over 20 volunteers who are working out through the schools."

One thing that has been interesting, the ministry spokesman says, is that "many Muslims have asked, 'Why are you Christians doing this?' -- and it has started a dialog." He says this crisis has softened the hearts of many Muslims in Lebanon to the spiritual truths of the gospel of Jesus Christ.

Who Backs an Immediate Ceasefire? 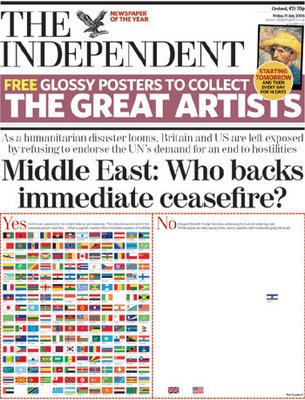 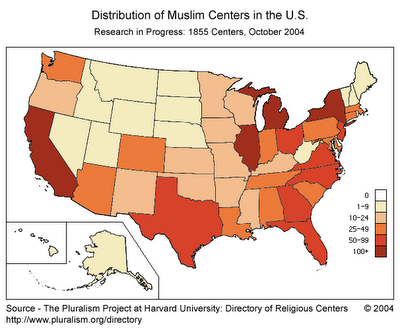 I just came across this map at the Pluralism Project. It's a geographical distribution of Islamic centers in the U.S. as of the Autumn of 2004. By the term "centers," I believe the researchers have included sites other than masjids (e.g., CAIR and MSA offices, and schools), plus the Ahmaddiya have been lumped in with the orthodox Muslims. If you click on the title link, you'll also find a number of similar maps for other non-Christian religions (e.g., Hinduism, Buddhism, etc.).
Posted by JDsg at 7/15/2006 05:02:00 PM No comments:

Email ThisBlogThis!Share to TwitterShare to FacebookShare to Pinterest
Labels: Islam

Time to abuse your mind. All of the following quotations come from the website, Fundies Say the Darndest Things! These are most, but not all, of the quotations that dealt with either Islam or Muslims since June. A lot of these quotations are fairly typical of your typical ignorant American bigot (nothing new in that respect), although a few are "roll your eyes" weird. I've added a few of my own comments.

"They all should be taken out back and shot because in America we appreciate the fact that we live a life that the the whole world envy. Whoever doesn't stand for the pledge is not an American and is probably a homo, Muslim or related to Michael Moore. Fags"
-- Tanner [2006-Jun-03]

"You must regard the founders of the United States as being equivalent to Muslim fanatics as I paraphrased the Declaration of Independence."
-- kerwin [2006-Jun-05]

"When compared with Islam, it is obvious how different Christianity is. Islam is a religion with a capital R. It is about unquestioning obedience to what purports to be divine law. There is no theological development in Islam. Christianity is really about the unmasking of what we now know as religion. This produces a freedom from all religiosity, all idols, all gods. It is a mistake to think that fundamentalism represents Christianity. The temptation for us all is to become religious and that includes the secularist who claims the ascendancy of reason. Dig a bit below the surface and you will find the same old tired idols, the same fear of death, the same human triumphalism and belief in progress. That is why it is only radical Christianity that will truly set us free."
-- Sells [2006-Jun-18]

"White people are the reason why America is the great country it is today. It wasn't till our Nation was settled by the Europeans when we truly became powerful. We don't need Mexicans, Muslims, liberals, or 'diversity.' These impurities are slowly but surely overtaking what was once our great and purely American nation."
-- AryanPrideAmerica [2006-Jun-25] (JD: White boy here must have forgotten about how much of the U.S. was built upon the backs of the slaves, Chinese workers, and other non-whites.)

[In response to an article about a Muslim woman of color representing Australia in the Miss World Pageant]: "Another insult to christianity"
-- Vikingcelt [2006-Jun-25]

"Many have not made the connection, but I assure you that a very strong, obvious, and evil connection does exist between UFOs and the Gospel of Jesus Christ. There exists throughout the world various 'gifted' people who supposedly can contact aliens and channel their messages to us earthlings. This certainly is interesting to consider but here is the really intriguing point. These messages routinely attack, ridicule, or undermine Christianity. The aliens don’t seem to be threatened by Islam, Buddhism, Hinduism, or any other ism. They focus their attacks on Christianity. Could this be because Christianity is the only true religion? This would be my bet."
-- Ralph C. Barker [2006-Jul-06]

"Do you believe in chance and probability? What are the chances that christian and jewish settlements would manage to not be at major faultlines? Why would such ideologies not take root there? Why would places like communist Cuba be hit hardest by hurricanes? Why would muslim/buddist/hindu/Atheist countries like Indonesia, India, Cuba, etc...constantly be marred by natural catastrophe...only to have the reprocussions of the natural disasters disapate before they can effect neighboring areas?"
-- wanderphilos [2006-Jul-13] (JD: Clueless here must have forgotten Katrina, Rita, and the many other hurricanes, not to mention the flooding, earthquakes and other natural disasters that take place within the U.S. Duh!)
Posted by JDsg at 7/15/2006 04:42:00 PM 2 comments:

This is one of those "Let's see if Youtube has any videos about..." posts. Today's subject, the 1983 movie, Koyaanisqatsi. This is one of my all-time favorite movies. Very much the deep-art house-make you think-type film. I first caught Koyaanisqatsi in its initial theatrical release; I happened to come across a flyer for the film at my community college, which, if I recall correctly, was playing that night at a nearby theatre. I had the time and was intrigued enough, so I went.

The movie has become, for me, a standard, not just for watching other movies but also in the making of them (or, I should say, how I would like to make them). I have wanted to make a few short films in the Koyaanisqatsi "style." Insha'allah, some year. In the meantime, I continue to watch the DVD over and over (usually when Milady's not here as she doesn't like the movie as much as I do ;) ).

Following are three clips that Youtube has from the movie. The first covers the night-time traffic scene, the famous shot of the full moon rising, and the human foot-traffic at Grand Central Station (?); the second clip is very short, of the street lights taken from inside the speeding car (later in the same sequence from the first clip); and the third clip is from the very end of the movie, where the rocket explodes and the camera follows the burning fragment of the rocket nozzle down.

Note: The music played at the very beginning and very end of the movie (with the men chanting "Koyaanisqatsi") is very reminiscent of the instrumental, "Genesis Ch. 1 V. 32," by the Alan Parsons Project on their album, "I Robot." It would not surprise me at all if Phillip Glass "stole" a bit of that song's melody. (One of the members of the APP e-mail list sent me a short mp3 that compares the two songs, one after the other, and it seems that Glass' melody is more than coincidental in its likeness to the APP song, which came out in June 1977, six years earlier than the movie.)
Posted by JDsg at 7/10/2006 05:54:00 PM No comments:

One reason why I don't live up north anymore... 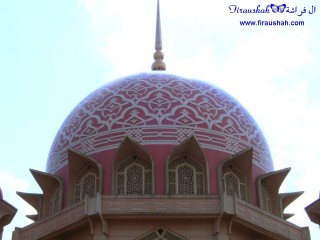 I've been wanting to write for the blog these past few days, but I've been fairly busy with various things. Milady and I had our regular Fardhu Ain class Friday night, went to "Superman Returns" Saturday night, attended our first "Arabic for Beginners" class (at a local masjid) Sunday night, and then spent much of Monday afternoon at the beach, having a picnic with Milady's family. (Monday was "Youth Day," a public school holiday, so Milady and her sister, both of whom are primary school teachers, had the day off from work. Likewise, I don't have any classes to teach on Monday, so I went out with them as well. I came back from the beach fairly well sun-burned.) And then, of course, yesterday and today I've had to teach, so I've got a fair amount of work that needs doing here, there and everywhere.

One thing that I have gotten done is July's wallpapers for Firaushah.com. These are free for anyone who's signed up for our mailing list *or* who has filled out our hijab/tudung survey. So, if you haven't signed up (or filled out the survey), take a few seconds to do so now so you can download both June and July's wallpapers FREE!
Posted by JDsg at 7/05/2006 11:01:00 PM No comments: