The Islamic Perspective on Oaths

This post is in response to Aunt Arctic's diary, Have you ever taken an oath or a vow, and what d(does)id it mean to you? The notion that the French Acadians in Canada would refuse to swear an oath of allegiance before God because of the strong possibility of breaking the oath in the future is actually a very commonplace attitude in Islam. Oaths are taken very seriously among Muslims, and so we tend to be more conservative in making the type of decision that results in some sort of oath, vow or contract. In other words, we try not to bite off more than we can chew. This is one of the reasons why Muslims (both individuals and businesses) try to avoid debt: not only because of the prohibition against interest, but also to avoid breaking a contract in case of financial distress.

The Qur'an has several verses that relate to the making of oaths. Some of the more important verses are:

And make not God's (name) an excuse in your oaths against doing good, or acting rightly, or making peace between persons; for God is One Who heareth and knoweth all things. (2:224)

God will not call you to account for thoughtlessness in your oaths, but for the intention in your hearts; and He is Oft-forgiving, Most Forbearing. (2:225)

God will not call you to account for what is futile in your oaths, but He will call you to account for your deliberate oaths: for expiation, feed ten indigent persons, on a scale of the average for the food of your families; or clothe them; or give a slave his freedom. If that is beyond your means, fast for three days. That is the expiation for the oaths ye have sworn. But keep to your oaths. Thus doth God make clear to you His signs, that ye may be grateful. (5:92)

Fulfill the Covenant of God when ye have entered into it, and break not your oaths after ye have confirmed them; indeed ye have made God your surety; for God knoweth all that ye do. (16:91)

As you can see, in Islam, the breaking of oaths has strong consequences so the making of an oath is an important matter to think over. For example,

For those who take an oath for abstention from their wives, a waiting for four months is ordained; if then they return, God is Oft-forgiving, Most Merciful. (2:226)

Deciding to separate from one's spouse automatically requires a four month period for both the cooling off of emotions and also to determine if the wife may have conceived a child.

The strong consequences also occur in any aspect where some sort of contract is drawn up, such as a business transaction, or in a legal proceeding:

But if it gets known that these two were guilty of the sin (of perjury), let two others stand forth in their places,- nearest in kin from among those who claim a lawful right: let them swear by God: "We affirm that our witness is truer than that of those two, and that we have not trespassed (beyond the truth): if we did, behold! the wrong be upon us!"

That is most suitable: that they may give the evidence in its true nature and shape, or else they would fear that other oaths would be taken after their oaths. But fear God, and listen (to His counsel): for God guideth not a rebellious people: (5:110-11)

Likewise, a dispute between husband and wife requires the strongest of oaths and a very terrible consequence if one of the two is lying against the other:

And for those who launch a charge against their spouses, and have (in support) no evidence but their own,- their solitary evidence (can be received) if they bear witness four times (with an oath) by God that they are solemnly telling the truth;

And the fifth (oath) (should be) that they solemnly invoke the curse of God on themselves if they tell a lie.

But it would avert the punishment from the wife, if she bears witness four times (with an oath) By God, that (her husband) is telling a lie;

And the fifth (oath) should be that she solemnly invokes the wrath of God on herself if (her accuser) is telling the truth. (24:6-9)

Finally, the following verse sums up very well both the consequences to breaking one's oath and the potential rewards, insha'allah, for keeping one. (This verse has an historical background to it, but the general application remains applicable.)

The Pause That Refreshes 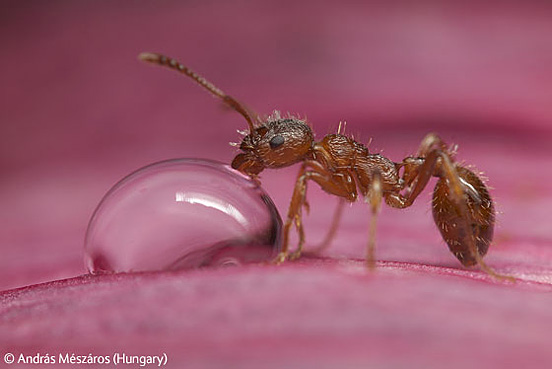 Email ThisBlogThis!Share to TwitterShare to FacebookShare to Pinterest
Labels: Photography

An Occurrence at Owl Creek Bridge

I'm reading a book on the Civil War right now, and read yesterday the chapter on the Battle of Shiloh (Pittsburg Landing). I noticed on the map of the battle field that an Owl Creek borders the field to the west. Was that the same Owl Creek that features in the Ambrose Bierce short story, An Occurrence at Owl Creek Bridge? Apparently not. The Shiloh Owl Creek is located in Tennessee, whereas the short story's Owl Creek is supposed to be located in Alabama.

Of course, the whole thing reminds me of the Twilight Zone episode (original airdate, February 28, 1964) that we all watched in high school. 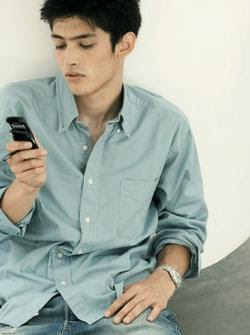 Headline from the Washington Post: Study of teen cellphone use reinforces impression that they're always using them.

A few quotes (and observations) from the article:

The connection between American teen and thumb-tapping keypad is so strong that more than four of five adolescents say they have slept with their cellphone in or near their bed, according to a report released Tuesday by the Pew Internet and American Life Project. Some keep it under the pillow, to awaken for late-night texts. Others use the built-in alarm to wake up.

Actually, Milady does that, using the phone for an alarm clock.

Indeed, the most vivid change surrounding cellphone use was the rapid increase in text messaging, researchers said. In an 18-month period, the number of teens who text every day rose from 38 percent to 54 percent.

The average adult racks up 10 text messages in a day.

A well-done bit of fun by a math teacher during his lecture just before the start of spring break. Check it out! 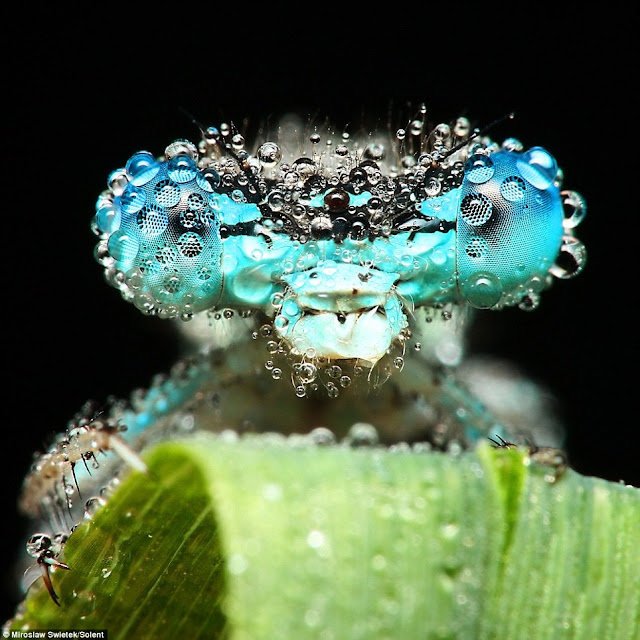 The Mail has an interesting selection of macro photographs online; the photos are of sleeping insects that are covered in dew. The pictures were taken by Polish photographer, Miroslaw Swietek, who walks into a nearby forest around 3 a.m. to take the pictures. The above photo is of a blue dragonfly; however, the online collection also features flies, a moth and another type of insect I can't identify (it's so covered with dew I'm not sure exactly what type of bug it is). Check it out!
Posted by JDsg at 4/03/2010 03:45:00 PM No comments: