I put up a similar video on this blog years ago, but this one is still fun to watch. 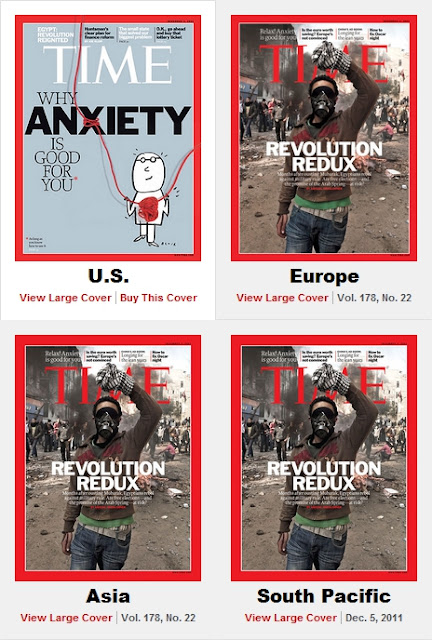 What is Time magazine's American editors afraid of? Cowards!

Update: As was out on Izzy Mo's Facebook wall, this nonsense of cowardly editorship at Time is nothing new. Just within the past few months, Time has used different covers for the American edition than what it has used for the rest of the world. In both of these situations, the International covers deal with substantive issues that, apparently, Time's editors feel would hurt delicate American sensitivities. The issues in question are Travels Through Islam (August 8, 2011; American cover topic: "Chore Wars") and Why the U.S. Will Never Save Afghanistan (October 24, 2011; American cover topic: "The Return of the Silent Majority"). Now I will admit, the last topic there (Silent Majority) is about the Occupy Wall Street movement, which is worthy of being a cover story. But the other three Time covers for that week (on Afghanistan) is also very important for Americans to read, especially when they need to wake up to the fact that the Afghanistan War has cost them so much in terms of blood and treasure.
Posted by JDsg at 11/26/2011 01:11:00 PM 2 comments: 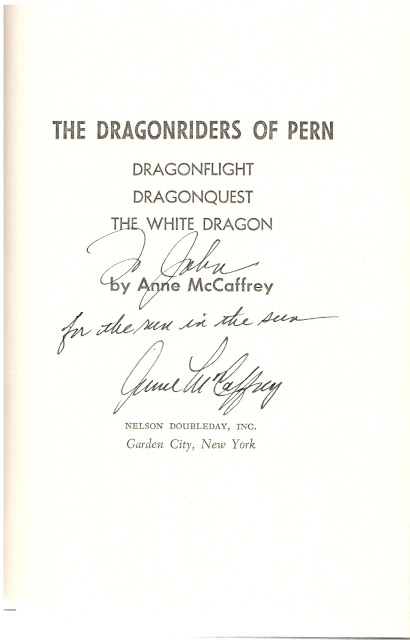 I am sorry to read that science fiction author Anne McCaffrey, one of my favorite writers, passed away three days ago (on the 21st) of a massive stroke. She was 85.

I've read Anne's work for many years now. I'm not sure exactly what year I began reading her novels, but it was around 1980. While I didn't care much for her non-Pern work (and some of her series, such as the Crystal Singer books, I've never read), I have read most of her Dragonriders of Pern series. (I've only read one of her books co-written with her son, Todd, Dragon Kin, which I didn't find that good.)

In the early 90s, I found out that Anne would be visiting a bookstore near Arizona State University; the only problem was, she was visiting on a Sunday and the Phoenix area at that time had no mass transportation on Sundays. All I had to get around town at that time was a bicycle. Now riding the bike that distance (about 13 miles) was no big deal for me... except that it was a very hot summer's day. So I rode down to the bookstore and arrived fairly sweaty, which Anne couldn't help but notice ("for the run in the sun"). :) Anne was gracious enough to autograph one of her books for me (the above image), which I've kept all these years. So, thank you, Anne, for many hours of reading pleasure all these decades. Insha'allah, I will continue to re-read your books and introduce them to my daughter when she's a little older.
Posted by JDsg at 11/24/2011 10:19:00 PM No comments:

Time Lapse Views of the Earth

Another great video compilation of the Earth from the International Space Station. The photos were taken by Ron Garan, Satoshi Furukawa and the crew of Expeditions 28 & 29 from August to October, 2011. Below is a list of the different sequences and the ground they cover:

A Road to Mecca

In A Road to Mecca, filmmaker George Misch sets out to explore the frontline between the Muslim world and the West. His guide for this journey is a man from the past - somebody who, 80 years earlier, crossed all boundaries between countries, cultures and religions.

Leopold Weiss was born a Jew on the edge of the former Austro-Hungarian Empire in 1900. But his story would unfold far away in the deserts of Arabia.

Feeling restless and unhappy in Europe, in 1922 Weiss accepted an uncle's invitation to join him in Jerusalem. But what began as a family visit soon turned into a life-changing journey.

Weiss enjoyed the hospitality of the Arabs he met in the Middle East and was enchanted by their lifestyle. With the passion of an explorer, he began to travel across the region.

His travels and encounters nurtured in him a sense that Zionism was causing a great injustice to the Palestinian Arabs. In Jerusalem, he got into heated arguments with the leaders of the Zionist movement and began to feel at a greater distance from the religion of his ancestors than ever before.

"Islam should be presented without any fanaticism. Without any stress on our having the only possible way and the others are lost. Moderation in all forms is a basic demand of Islam."

As he discovered the Muslims of the Middle East, Weiss also discovered Islam - studying the Qur'an and finding not only the answer to the spiritual emptiness he had felt but also an alternative to the materialism of Europe's Roaring Twenties. In Saudi Arabia, Weiss felt truly at home, writing: "I am no longer a stranger."

In 1926, he converted to Islam and changed his name to Muhammad Asad. Full of enthusiasm, he embarked upon his first pilgrimage to Mecca.

Curious to get to know other Muslim communities, in 1932 Asad left Saudi Arabia - traveling to Turkistan, China and Indonesia. In India, he met poet and philosopher Muhammad Iqbal. Iqbal dreamed of creating a separate Islamic state as a solution to the bloodshed between Indian Muslims and Hindus. Iqbal's vision of Pakistan quickly became Asad's own dream.

Asad campaigned for the creation of Pakistan by writing books, giving public lectures and hosting radio programs. He also drafted the outline for an Islamic constitution in which equal rights for women were secured.

In 1951, Asad became Pakistan's envoy to the United Nations. But to his dismay he was forced out of the position after just one year. Deeply disappointed, he turned his back on politics, deciding instead to write his autobiography in the hope that it would promote better understanding between Muslims and the West. The Road to Mecca quickly became a bestseller.

By 1970, Asad had grown increasingly concerned that the Qur'an was being misinterpreted and misused for political goals. This motivated him to undertake his biggest challenge: a new translation of and commentary on the Qur'an. He settled in Morocco and estimated that it would take him four years to complete. Seventeen years later it was finished. He dedicated it to "people who think."

"Every age requires a new approach to the Qur'an for the simple reason that the Qur'an is made for all ages. It is our duty to look for deeper meanings in the Qur'an in order to increase our knowledge and experience. The Qur'an wants your intellect to be always active and trying to approach the message of God. God himself dedicated this book to people who think."

Despite the fact that Asad today has a loyal following among those who share an interest in his writings and an intellectual affiliation with him, his translation was not embraced by all. Rumor has it that there were even book burnings of Asad's Qur'an.

Emotionally and financially exhausted, he withdrew to Europe - settling in Spain in 1987. He planned to revise his translation once more but old age and prolonged illness prevented him from completing it. On February 20, 1992, he died, alone and secluded.