This is a beautiful video of Auroras Borealis over the city of Tromsø, Norway. Enjoy!

Thomas Ricks at Foreign Policy suggests that, instead of re-instituting a military draft, the US government create a three-option national service program:

The military option. You do 18 months of military service. The leaders of the armed forces will kick and moan, but these new conscripts could do a lot of work that currently is outsourced: cutting the grass, cooking the food, taking out the trash, painting the barracks. They would receive minimal pay during their terms of service, but good post-service benefits, such as free tuition at any university in America. If the draftees like the military life, and some will, they could at the end of their terms transfer to the professional force, which would continue to receive higher pay and good benefits. (But we'd also raise the retirement age for the professional force to 30 years of service, rather than 20 as it is now. There is no reason to kick healthy 40-year-olds out of the military and then pay them 40 years of retirement pay.)

The civilian service option. Don't want to go military? Not a problem. We have lots of other jobs at hand. You do two years of them -- be a teacher's aide at a troubled inner-city school, clean up the cities, bring meals to elderly shut-ins. We might even think about how this force could help rebuild the American infrastructure, crumbling after 30 years of neglect. These national service people would receive post-service benefits essentially similar to what military types get now, with tuition aid.

The libertarian opt-out. There is a great tradition of libertarianism in this country, and we honor it. Here, you opt out of the military and civilian service options. You do nothing for Uncle Sam. In return, you ask for nothing from him. For the rest of your life, no tuition aid, no federal guarantees on your mortgage, no Medicare. Anything we can take you out of, we will. But the door remains open -- if you decide at age 50 that you were wrong, fine, come in and drive a general around for a couple of years.
(When The Rich Abandoned America -- and What That Has To Do With Defense)

In general, I don't have a problem with this. Both South Korea and Singapore, where I've lived, have compulsory national service for young men, and in both countries the system seems to work well. (Malaysia also has a national service, but I've gotten the impression that the system may be somewhat dysfunctional. If a national service is implemented it needs to be applicable to everyone; for example, if the above system was used, everyone who is not exempt for certain reasons would have to pick one of the three options.)

South Korea provides for a civilian service in addition to a military service. Those men who chose the civilian service have several options to chose from. The most visible option chosen was that of the police force, in which the young men would work as a foot patrol officer. I also knew a guy who did his civilian service working as a prison officer.

Singapore also has a civilian service in that the men can join either the police force or the civil defense force (fire/ambulance services). The men are also required to continue their service as reservists after their two years of active service until the age of 40 (or 50, depending upon their rank)

Both countries have penalties for not performing national service. In South Korea, I remember a case of a pop musician who had avoided his national service and had left the country to go on tour. When he returned home, he was refused entry back into the country.

The thing that really strikes me about this proposal is that none of it, including the "libertarian opt-out," is really new. Robert Heinlein had his own libertarian opt-out when he wrote Starship Troopers in 1959. In the novel, if a person didn't serve in the military, he was allowed no voice in the running of the government (i.e., through voting). Personally, given the laxity of Americans to vote in elections to begin with, I don't think that penalty goes far enough.
Posted by JDsg at 11/23/2010 11:41:00 PM No comments:

Classic, and very funny! If you're a fan of The Lord of the Rings movies, this short video is a must watch! Although, obviously, McKellen had never watched Ralph Bakshi's 1978 version of LOTR (or perhaps even read The Fellowship of the Ring by that point in the filming of the movie). 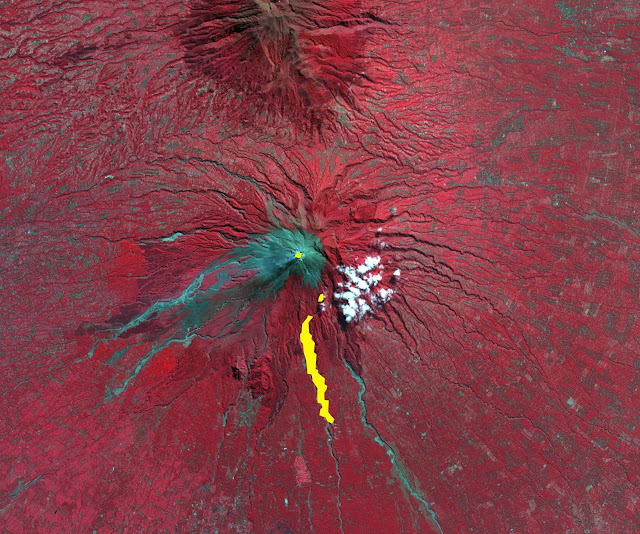 On October 26, 2010, Merapi volcano in Indonesia erupted, killing at least 38 people and prompting authorities to evacuate tens of thousands of inhabitants from around the mountain. On the night of October 30, the Advanced Spaceborne Thermal Emission and Reflection Radiometer (ASTER) instrument on NASA's Terra spacecraft captured a thermal infrared image (center Figure 1) of the hot volcanic flow that resulted from collapse of the summit lava dome, and that led to the ensuing release of ash plumes (center Figure 1; hot areas are brightest). In the daytime image from 2003 (left Figure 1), vegetation is displayed in red, and older volcanic flows are in blue-gray. The composite image on the right superposes the hot flow and summit dome areas from 2010 in yellow on top of the 2003 image. Gaps in the hot areas are due to concealment by intervening clouds in the 2010 night infrared image. The ASTER image is located at 7.5 degrees south latitude, 110.5 degrees east longitude. The image covers an area of 17 by 19 kilometers (11 by 12 miles).

With its 14 spectral bands from the visible to the thermal infrared wavelength region and its high spatial resolution of 15 to 90 meters (about 50 to 300 feet), ASTER images Earth to map and monitor the changing surface of our planet. ASTER is one of five Earth-observing instruments launched December 18, 1999, on Terra. The instrument was built by Japan's Ministry of Economy, Trade and Industry.

Update: Another, less impressive image from ASTER can be found at PIA13607: Merapi Volcano Continues its Destructive Eruption.