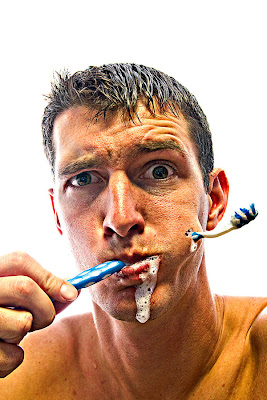 You are what you eat, apparently. ;) 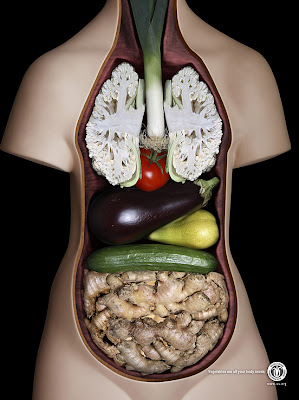 Here's an interesting cover of Michael Jackson's Beat It by a Bay Area indie jazz-pop band called Pomplamoose ("grapefruit" in French). Nataly Dawn does vocals and Jack Conte is the jack-of-all-trades instrumentalist. It's a rather cool video, in the line of Fabio Valdemarin's work. Check it out!

This little video is of my hometown, Elmira, New York, where I was born and raised. Unfortunately, I haven't been back there since Christmas 1986. The video starts by heading north before doing a quick turn to the west toward the downtown area, roughly following the course of the Chemung River. The viewer then heads southwest, back over the river and above Southside, the neighborhood I lived in. The hill at the end of the video is called Mount Zoar.

The beauty of the Internet is that it is global and allows people with talent from all over the earth to share their work. This short video, Ataque de Pánico! (Panic Attack!), comes from the South American country of Uruguay. The video's a little reminiscent of War of the Worlds and Battlestar Galactica, but comes off really well due to its high production values. Ain't CGI wonderful? ;)

Mike thinks in Martian -- and this gives him a different 'map.' You follow me"

"I grok it," agreed Jubal. "Language itself shapes a man's basic ideas."

"Eh? Badly," admitted Jubal. "Put in a while as an army surgeon in North Africa. I still read it because I prefer the words of the Prophet in the original."

"Proper. The Koran cannot be translated -- the 'map' changes no matter how one tries. You understand, then, how difficult I found English. It was not alone that my native language has simpler inflections; the 'map' changed. English is the largest human tongue; its variety, subtlety, and irrational idiomatic complexity make it possible to say things in English which cannot be said in any other language. It almost drove me crazy ... until I learned to think in it -- and that put a new 'map' of the world on top of the one I grew up with. A better one, perhaps -- certainly a more detailed one.

"But there are things which can be said in Arabic that cannot be said in English."

Jubal nodded. "That's why I've kept up my reading."

In the late 90s, as I studied the Qur'an more intently, I began to notice a change in my mind frame, a change in how I viewed and thought about the world, at least from a religious and ethical perspective. I knew this had come from studying the Qur'an, but I wasn't quite sure how this change came about. Then, the other day, as I began reading Toshihiko Izutsu's fascinating book, Ethico-Religious Concepts in the Qur'an, I had some insight with respect to this question.

This change in mind frame isn’t new or unique. As the above passage from Robert Heinlein’s novel, Stranger in a Strange Land, discusses, many people who learn a foreign language at an older age undergo an “overlay” of their mental “map” as they develop some fluency in the new language. This isn’t due to just the addition of new vocabulary and rules of syntax, but also from an increased understanding of the foreign culture and the very assumptions the native speakers have made about the world that they incorporated into the language. This is yet another reason for people to learn a foreign language, to develop empathy for the people and culture of the language one is learning.

Of course, unless one is very proficient in the new language, one is likely to have a less-than-perfect understanding of all the nuances in the new language (a problem that afflicts native speakers around the world, as legions of language teachers will readily attest to). Add to this any other issues that might arise in deciphering the sender’s message. As Izutsu wrote,

[I]f we are but reminded that even when we are actually reading a text in the original we tend almost unconsciously to read into it our own concepts fostered by our mother tongue, and thus to transmute many, if not all, of its key terms into equivalent terms obtainable in our native language. But if we do this, we are, in reality, doing nothing more than understanding the original text in a translation; we are, in other words, manipulating translated concepts without being aware of it.

For readers of the Qur’an whose mother tongue isn’t Arabic, this paragraph describes a familiar concept: Qur’an > Translation > Interpretation. Ignoring the real bastardizations of the Qur’anic text (for example, interpreting the text according to modern political ideologies, such as Western feminism), simply reading a translation of the Qur’an may result in “mistranslations” as a result of interpreting the translation according to the meanings inherent in the reader’s mother tongue. (This is one reason why I prefer translations, such as Yusuf Ali’s, that provide various meanings for key words in the footnotes, in addition to literal translations of some phrases, when appropriate. At least with the additional definitions the reader is able to evaluate how those definitions could apply to the translated text.)

What really provoked the most thought, though, was the following paragraph:

Take, for instance, the English word 'weed.' One dictionary defines this word as 'wild herb springing where it is not wanted,' in short, an undesirable, unwanted herb. Now in the world of objective reality, that is, in the realm of nature, there is no such thing as an 'undesirable' herb; such a thing can exist only in the sight of man, who looks at the infinite complexity of natural objects, puts them in order, and evaluates them in accordance with his various purposes. The concept of 'weed' is the result of such a process of ordering, sorting out, evaluating, and categorizing. It embodies, in this sense, a particular point of view, a particular subjective attitude of the human mind.

My thought, then, is that as I continued (and continue) to study the Qur’an, my change in mind frame was akin to that of an overlay from learning a foreign language. The content of the Qur’an is powerful enough that, despite having relied upon English translations and my own interpretation of the text (at least for the first few years of study), I was able to begin thinking in the way Allah (swt) intended for me to think; i.e., as a Muslim.

Muslims, then, think in the way that the Qur’an has trained us to think, which is a different (and, IMO, better) manner than that of most non-Muslims. We will never think as well as Allah (swt), even if we understood classical Arabic as a mother tongue in the way the Arabs of the Prophet’s (pbuh) generation did. Even so, despite our limitations, the closer one is able to mirror the message of the Qur’an in one’s mind* and apply Qur’anic instructions in one’s daily life, the closer one will be, insha’allah, to becoming the best Muslim one can possibly be.