Night of the Living Trekkies

Screw the book, give me the movie! :) I was LMAO while watching this video. And if you're a real Trekkie, you know the name of the female reporter at the beginning. ;) 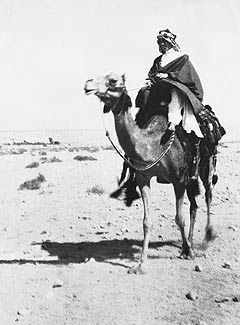 I am currently reading T.E. Lawrence's (Lawrence of Arabia) book, Seven Pillars of Wisdom. The book itself is fascinating, being both a war memoir of the Arab Revolt and a travelogue describing the geography and peoples of northern Arabia and Jordan.

I've come across two paragraphs about camels that I found of interest; the first paragraph answers a question for us non-Arab Muslims who are unfamiliar with camels: Why is the Prophet Muhammad (pbuh) always mentioned in the various biographies as riding on a female camel?

We grew short-answered to one another; but relief came toward six o'clock, when we halted for supper, and baked ourselves fresh bread. I gave my camel what was left of my share, for the poor animal went tired and hungry in these bad marches. She was the pedigree camel given by Ibn Saud of Nejd to King Hussein and by him to Feisal; a splendid beast; rough, but sure-footed on hills, and great-hearted. Arabs of means rode none but she-camels, since they went smoother under the saddle than males, and were better tempered and less noisy: also, they were patient and would endure to march long after they were worn out, indeed until they tottered with exhaustion and fell in their tracks and died: whereas the coarser males grew angry, flung themselves down when tired, and from sheer rage would die there unnecessarily. (p. 258)

Two paragraphs later, Lawrence relates how camels from one part of Arabia might not do as well in other parts of the country:

Camels brought up on the sandy plains of the Arabian coast had delicate pads to their feet; and if such animals were taken suddenly inland for long marches over flints or other heat-retaining ground, their soles would burn, and at last crack in a blister; leaving quick flesh, two inches or more across, in the centre of the pad. In this state they could march as ever over sand; but if, by chance, the foot came down on a pebble, they would stumble, or flinch as though they had stepped on fire, and in a long march break down altogether unless they were very brave. So we rode carefully, picking the softest way, Auda and myself in front. (pp. 258-59)

I had an interesting lesson in grammar recently. About a week ago, Milady had a toothache that ultimately required her tooth to be pulled. As I drove away from the dentist's office, I tried to tell my two-year-old daughter why we had left Ibu (Mother) behind: "Ibu gigi sakit" (literally, "mother teeth hurt"). The maid, who was sitting behind me in the car, corrected my sentence: "Ibu sakit gigi."

I found this difference in syntax interesting. Using the rules of English syntax for a Malay sentence, I was trying to say, "Mother's teeth hurt." But the Malay syntax makes it seem to me that "Mother hurt (her) teeth." In English, of course, we assign blame (or not) in our sentences as the case may be. Milady didn't hurt her teeth deliberately; the tooth began hurting of itself. From my perspective, it seems like the Malay sentence is casting blame on my wife for having hurt her tooth intentionally, even though I know that's not really the case.
Posted by JDsg at 9/21/2010 10:18:00 AM 1 comment: