The Only Video of Anne Frank 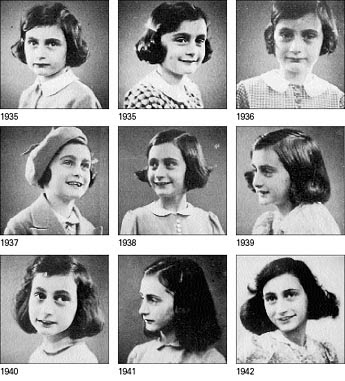 The Anne Frank House, the museum which was the hiding place for Anne Frank, her family, the Van Pels family and Fritz Pfeffer during World War 2, has uploaded the only known film footage of Anne onto Youtube. The film was taken on July 22, 1941, and shows a newly-wed couple walking out of the building (No. 37 Merwedeplein, Amsterdam) adjacent to the home Anne was living in at the time (No. 39 Merwedeplein). (This was about one year prior to the Frank family going into hiding.) Anne, who was 13-years-old at the time, appears at the nine-second mark of the video, and can be seen leaning out of the window to take a look at the couple.

The Anne Frank Channel on Youtube can be subscribed to here.

My daughter is 8 years old. She heard of Anne Frank today from another child in class who did a report on her. It is amazing how intense the feelings of connection can still be to Anne Frank even in today's times. We are a black family, and so the travesties of slavery, racial injustice, and tragedy that Anne Frank endured are definatly a very touching and sensistive subject for us. I am proud to see that my daughter can relate to the travesty as well as being inspired by Annes' courage & hope that she would be free some day. Madison Shepherd's Mom

I watched a show that touched on Anne Frank's life today, and couldnt stop the tears from streaming down my face. The suffering that people put upon people and this little girl, breaks my heart. We must keep Anne's story alive in each generation.

I've been learning about Anne Frank for a little over a month...in my own oppion, Anne seemed like a great person and its ashame that Hitler had to go off and kill all of those Jews like that.I play Anne in the life and time of Anne Frank. She was so young and her life was cut short but im glad to play the amazing role of Anne Frank.

I believe Anne would love the fact that she was able to inspire so many people by just being herself. She really achieved more than she could have ever dreamed. The whole world has changed in part because of her writing. We may never know the number of lives she touched because she is still touching new ones every day. She was a true gift to humanity.