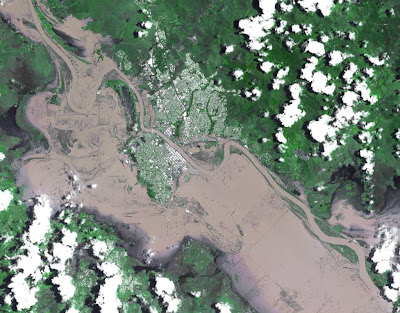 On January 7, 2010, the Advanced Spaceborne Thermal Emission and Reflection Radiometer (ASTER) instrument on NASA's Terra spacecraft captured this image of the inundated city of Rockhampton, Queensland, Australia. Torrential rains in northeastern Australia caused the Fitzroy River to overflow its banks and flood much of the city and surrounding agricultural lands. Both the airport and major highways are underwater, isolating the city. In this natural color rendition, muddy water is brown, and shallow, clearer water is gray. Vegetation is depicted in various shades of green, and buildings and streets are white. The image is located at 23.3 degrees South latitude, 150.5 degrees East longitude. The image covers an area of 22 by 28.1 kilometers (13.6 by 17.4 miles).

I was asked the following question this morning:

How would you respond to those who attack the Abrahamic religions on the grounds that they promote a pre-industrial system of values which no longer makes sense today.

The first thought that came to mind is, "These people don't understand Islam (or shari'ah)." Or perhaps even the other Ibrahimic faiths. Not that that's anything new!

I talked to my wife about this topic during lunch, and I'll write down what she said first, before giving my own answer. Her thought is that Islam maintains a dynamism through ijtihad. As I'm sure you know, Muslims are constantly asking for fatawa from imams regarding the halalness of various issues. Although the Qur'an and Sunnah are static documents, both shari'ah and fiqh are dynamic. The novel situations presented for review make fresh interpretations a regular occurrence. Add to that the differences in opinion between different scholars. So, from her (and my) perspective, Islamic values make a great deal of sense today because the values are evaluated and applied in our post-industrial society.

My own perspective is that Islamic values are not time-limited, but timeless. The details of human life have changed greatly over the millennia, but the essence of human existence is more or less the same since the beginning of recorded history. Shari'ah today deals with the same issues that existed when the Qur'an was revealed 1400 years ago: marriage, divorce, inheritance, theft, murder, eating, drinking, adultery, sex, and so on. Nothing has really changed since the beginning of time. What Islam doesn't do is change its core principles, its values. The guidelines for determining what is right and what is wrong remain the same. The same cannot be said for modern values, and I think society is the poorer for it.

The Muslim preference for a religiously-based legal system is probably the strongest example, but I'll use natalism (famously promoted by Roman Catholicism) as my example.

In pre-industrial times, natalism made sense for two reasons:

1) The pre-industrial economy was poor and to first approximation a zero sum game, so the only way to get appreciably richer was to rob wealth from someone else thru aggressive war.
2) The state of military technology at the time meant that "victory belonged to the bigger battalions", so maximizing the birth rate was an effective way for a state to maximize its political power.

Today however, natalism is a bad idea financially (because of the huge cost of educating all those extra children to the standard which a modern society requires) and can no longer be justified by its original basis. Aggressive war -- at least against other major powers -- is now suicidal due to nuclear weapons, and industrialization now allows ample opportunities for positive-sum economic growth.

And then there's the environmental consequences of excessive population growth!

Regarding natalism, while there is nothing similar to the Biblical "go forth and multiply," there is a slight natalist attitude in the Qur'an. You mention the argument that "natalism is a bad idea financially (because of the huge cost of educating all those extra children to the standard which a modern society requires)." But from an Islamic perspective this argument is very weak because it is an argument based upon selfishness. (This is a good example of the weakness of "modern values.") Several Qur'anic verses (e.g., 6:151, 17:31) condemn the killing of infants and children from a fear of their becoming economic burdens. Indeed, according to one hadith, the killing of children "lest it should share your food" is the second worst sin, behind only shirk.