An Open Letter to the Squires Alumni

Between 1998 and 2001, I was involved in the start-up of the Copper Star drum corps (both the senior corps, which started first, and the junior corps). I hope you won't mind, then, if I give you all some friendly advice about trying to start up a drum corps.

First and foremost, do know that this will be a time-consuming endeavor. It's amazing just how much time drum corps takes up, and the world is not the same as it was in the 70s when there were much fewer distractions. So be prepared to take this activity on as the equivalent of a second job if you're wanting to do this right.

Second, treat the organization like a business. One of the most important activities corps personnel are going to undertake, especially at the beginning, is fundraising. Do everything you can to raise money. Because this will be an adult activity as opposed to a youth activity, fundraising will be more difficult; people will donate to help out kids, but not for other adults. Expect to work hard for the money. Likewise, be creative in your fundraising. The old, traditional methods for raising money are difficult to use today (e.g., bingo). How else can you earn money? (Another thing: keep out of debt as much as possible. Use cash for all corps purchases.)

Third, accept everyone. Don't limit yourself to actual alumni of the Squires and Pages. Bring in as many people as you can. Consider various levels of commitment, a la the Empire Statesmen, who had three levels (those marching in the DCA shows being in the third and most committed level). Likewise, don't limit yourself to adults. If you compete, make the organization an all-age corps so that you can help keep the drum corps activity in upstate New York alive.

Fourth, build up the organization as you can. Don't think that you have to have a full-blown competitive DCA corps in your first season. Equipment is expensive, especially horns. Build up the guard and drum line first; those two groups have the most opportunity to perform in the off-season through WGI events. Uniforms aren't a must have, not at this time. Nice polo shirts in the corps colors will work just as well for the time being.

Five, use momentum to help you build the corps. Competition is key. You're located in the heart of DCA country: take advantage of that. Build up by performing in as many venues as possible (WGI, DCA/Minicorps, parades, other exhibitions). The more exposure you get the easier it will be to recruit; the bigger the itinerary, the easier it is to retain membership. People will drop out if there are no events coming up in the future.

I may update this if more points come to mind. Don't be afraid to ask specific questions; I can respond publicly or privately. 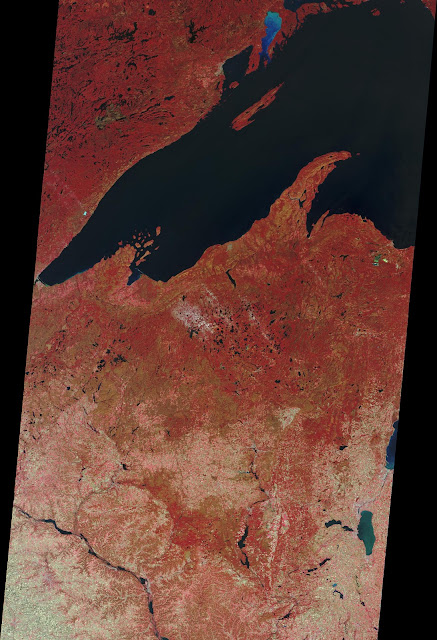 Just in time for Halloween, NASA's Multi-angle Imaging SpectroRadiometer (MISR) instrument on NASA's Terra satellite presents this "false color" view of portions of Wisconsin and Michigan, acquired on October 30, 2008. Many of the small lakes in the region have supernatural-sounding names, including Devil's Lake, Druid Lake, Ghost Lake, Spider Lake, and Witches Lake in Wisconsin; and Bat Lake, Corpse Pond and Witch Lake in Michigan. The area is bordered on the north by the scarily shaped Lake Superior, where the ore freighter Edmund Fitzgerald mysteriously sank on the evening of November 10, 1975, during a fierce seasonal storm known as the Witch of November. Legendary sightings years after the wreck occurred, make the Fitzgerald the most famous ghost ship of the Great Lakes. Arguably one of America's most magnificent national parks is the Grand Canyon in northern Arizona. The Advanced Thermal Emission and Reflection Radiometer (ASTER) instrument on NASA's Terra spacecraft captured this 3-D view on July 14, 2011, created by draping the ASTER image over a Digital Elevation Model produced from ASTER stereo data. In this perspective view looking to the northeast, the buildings and roads in the center foreground are Grand Canyon Village. The Bright Angel Trail can be seen descending 3,000 feet (914 meters) to Indian Garden, before continuing to the Colorado River far below. Completing the 25-mile (40-kilometer) rim-to-rim hike takes the hiker to the North Rim and the North Rim Lodge. The ASTER image is located near 36 degrees north latitude, 112.1 degrees west longitude. 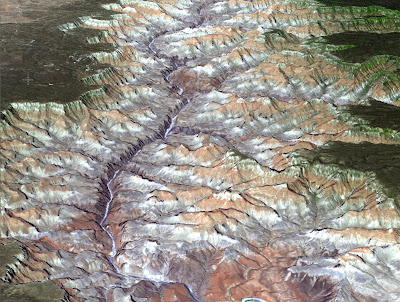 The Advanced Thermal Emission and Reflection Radiometer (ASTER) instrument on NASA's Terra spacecraft provided this spacebird's-eye view of the eastern part of Grand Canyon National Park in northern Arizona in this image, acquired July 14, 2011. In this perspective view looking to the west, the tourist facilities of Grand Canyon Village are visible in the upper left. The higher-elevation North Rim is seen on the right. The canyon is up to 9 miles (14.5 kilometers) wide and 5,600 feet (1,707 meters) deep, attesting to the power of moving water to carve Earth's surface. This 3-D view was created by draping the ASTER image over a Digital Elevation Model produced from ASTER stereo data .The ASTER image is located near 36 degrees north latitude, 112.1 degrees west longitude.

I Am Not Moving

"Hypocrisy has its own elegant symmetry."