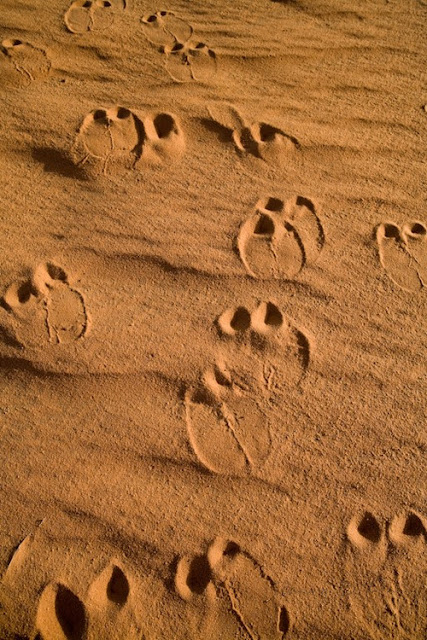 I had a recent discussion with an atheist, which has led to a new insight about the differences between atheists and Muslims (presumably this distinction could apply to a follower of any "Western" religion, but I'll approach this only from the perspective of Islam).

The difference is that an atheist is a literalist. They expect there to be proof of God's existence in such a way that there is no doubt in the atheist's mind. Ideally for them that proof would be tangible in nature and directly linked to God (as opposed to an indirect link, which would sow more confusion in their minds).

Muslims, on the other hand, tend to be more "metaphoralists," if there is such a word. The Qur'an, in and of itself, is a tangible, direct link to Allah (swt), which is proof enough for Muslims of His existence. But the Qur'an also has numerous verses that provide tangible evidence of His existence that are indirect; still, if one were to think more deeply upon these tangible proofs one might become convinced of His existence. The verses in question I refer to as the "nature verses," of which here are some:

It is He who sends down rain from the sky: from it ye drink, and out of it (grows) the vegetation on which ye feed your cattle. With it He produces for you corn, olives, date-palms, grapes and every kind of fruit: verily in this is a sign for those who give thought. He has made subject to you the Night and the Day; the sun and the moon; and the stars are in subjection by His Command: verily in this are Signs for men who are wise. And the things on this earth which He has multiplied in varying colors (and qualities): verily in this is a sign for men who celebrate the praises of Allah (in gratitude). It is He Who has made the sea subject, that ye may eat thereof flesh that is fresh and tender, and that ye may extract therefrom ornaments to wear; and thou seest the ships therein that plough the waves, that ye may seek (thus) of the bounty of Allah and that ye may be grateful. And He has set up on the earth mountains standing firm, lest it should shake with you; and rivers and roads; that ye may guide yourselves; And marks and sign-posts; and by the stars (men) guide themselves. Is then He Who creates like one that creates not? Will ye not receive admonition?
(16:10-17)

Behold! in the creation of the heavens and the earth, and the alternation of night and day,- there are indeed Signs for men of understanding,- Men who celebrate the praises of Allah, standing, sitting, and lying down on their sides, and contemplate the (wonders of) creation in the heavens and the earth, (With the thought): "Our Lord! not for naught Hast Thou created (all) this! Glory to Thee! Give us salvation from the penalty of the Fire."
(3:190-91)

The key points to take away are that:

1) Natural phenomena are signs of Allah (swt). They are indirect evidence, but evidence nonetheless, for the existence of God. They are more than just the natural world that we see every day and take for granted.

2) It takes a person with a flexible mind, a person who can think deeply, to make the connection between the natural world and God. Notice what the Qur'an says in several of the verses above, that these are signs "...for those who give thought," "...for men who are wise," "...for men of understanding." Rather than being a religion of blind faith, Islam is a religion that asks its followers to think and contemplate. This is where I think atheists stumble. They have lost the ability to reason for themselves. They expect proofs from others instead of thinking for themselves.

To put the matter another way, the signs of God are like camel tracks in the sand. It is enough for the Muslim to see the tracks to know of the camel's existence. The atheist expects to see the camel in order to be satisfied of the proof, and blames the believer when the camel is never seen. But the tracks are proof enough, if only the atheist could recognize the tracks for what they really are.

3) Finally, the Qur'an points out to men of understanding who recognize that natural phenomena are signs of God's existence, that they would (or at least should) be grateful to Allah (swt) for what He has provided. Everything, and I mean everything, comes from Him, including our lives. But are most people grateful? Do they give Him the praise He deserves?
Posted by JDsg at 9/06/2012 12:00:00 PM

Nice post. Just one potential problem with the camel tracks analogy. Man has actually *seen* the camel, so that's why it's not such a mental stretch to suggest that camel tracks allude to the existence of a camel.

A better example would be tracks of a species whose existence is disputed. For example, would footprints of the Yeti or Sasquatch suffice as proof for their existence?

I would think not...

The reason for the choice of the camel is because I had read a Hadith a couple months ago that used the same example. If I could have found the Hadith I would have used it. This was a paraphrasing of the original.

Actually, the muslim in your story is in the situation of Winnie the Pooh, who believed he had found the tracks of a woozle (or possibly a wizzle) and would undoubtedly have said the fact that there were tracks is proof of the existence of woozles (or, as the case may be, wizzles) as only a woozle (or wizzle) could leave such tracks.