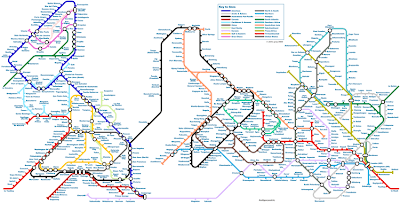 I had to download a world map yesterday for one of my classes, and happened to stumble upon The Upsidedown Map Page, a webpage devoted to various published maps of the world that have south at the top and north at the bottom.

If that wasn't odd enough, this guy had, in turn, referenced the website of a British artist, Gallerisation, who has made a series of world maps that are based upon an underground/subway-system map template. The above map is one example. The name of the map is "Antipocentric." The map is both upside down and Pacific-centric. Instead of the North American-style of world maps, where the Pacific Ocean is split into two parts and the Atlantic remains whole, this map has a whole Pacific Ocean and the Atlantic is split into two. (This type of Pacific-centric map is very common in Asia, BTW.) Check out the Gallerisation website to check out other subway template world maps.
Posted by JDsg at 8/16/2007 02:01:00 PM

This reminds me of the train map in Tokyo! Colourful and complex.

Yes, I agree. That map, or the one for the Seoul MRT system, which has 9 lines.

There's another interesting map that's based on the Tokyo train map, but this one is for the 200 most popular websites on the Internet.