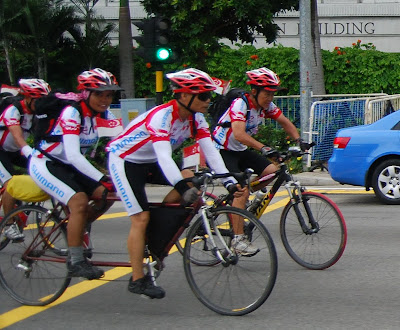 Yesterday, Milady and I were driving home past the Fullerton Hotel when we came across 50 bicyclists. I just happened to have my camera with me, so I took a few quick shots. None of the pictures came out as well as I would have wanted, but I do like this shot. This is actually a small part of a much bigger picture, but the young Muslim woman (wearing a small tudung underneath her helmet) just happened to look at me as I was taking the photo. The bicyclists were at the tail end of the Penang (Malaysia)-Singapore Homecoming Challenge Ride sponsored by NTUC, and were being given a police escort through the financial district.

It was a long ride for some 50 NTUC members who cycled the 1,000 kilometres from Penang to Singapore in the past week.

And joining them was Member of Parliament Teo Ser Luck, who came in at the last 40 kilometres of the journey.

The team is the biggest this year and the average age of the participants is 40.

The oldest is 70 years old - which goes to show that age is no boundary when it comes to keeping fit.

Mr Teo said: "They're using cycling not just for healthy lifestyle but also for making more friends across the border. This is the third time they are doing it and in the last two times they have also ventured to other parts in Malaysia."