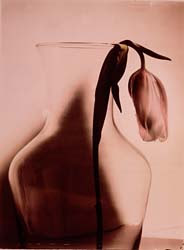 A strange story out of Texas: The Houston Chronicle reports of a man who, while cheating on his wife, had the receipt for the flowers - along with his romantic message to the mistress - sent to his home, which his wife discovered. The wife, of course, is filing for divorce, but the man is suing the flower company, 1-800-Flowers.com, for breach of contract, saying that a company representative promised him that they wouldn't send anything (such as the receipt) to his home. Now that they have, he feels they should pay the extra amount of money he will owe to his wife because she now has written proof of his infidelity.

Leroy Greer meant to say it with flowers to his girlfriend, but his wife heard about it too, and now the whole arrangement is in federal court.

Claiming 1-800-flowers.com made his life considerably less rosy, Greer sued the flower delivery company, alleging it made his divorce case thornier by faxing his wife a receipt for flowers he had sent his girlfriend — along with the romantic words he wrote for the card.

The suit, filed this week in Houston, asks that the company pay for his mental anguish and for the increased amount he figures he'll have to pay in his divorce case, pending since 2005 in Fort Bend County, because his wife has new evidence against him.

Greer, a luxury car sales manager, complains the florist breached the contract made when he called and ordered long-stemmed red roses and a stuffed animal for his girlfriend. He says the florist broke its own privacy policy and a specific promise that nothing would be sent to his home.

The company said it will not comment on the lawsuit but also will not take responsibility "for an individual's personal conduct."

His conduct isn't the issue, said one of Greer's lawyers, Tara N. Long. "Our client is not saying the circumstances of his relationship are not his fault," she said.

But Long said 1-800-flowers.com harmed Greer, who alleges that what had been an amicable divorce case bloomed into a hellish fight, and that he could lose more money because his wife now has written proof of his relationship with another woman.

"We didn't file this frivolously. We tried to talk to 1-800-flowers.com. All indications were they were willing to settle, then they stopped communicating," said Kennitra M. Foote, Greer's other lawyer. They asked for $1 million in a demand letter to the florist. They said the extra divorce costs alone could be more than $300,000.

1-800-flowers.com, a publicly traded company based in Carle Place, N.Y., responded to an inquiry about the suit Thursday with a written statement from Steven Jarmon, vice president for brand communications and partnership marketing:

"At 1-800-flowers.com we take pride in creating relationships with our customers by recognizing and thanking them for their business. We take all matters relating to our customers seriously; however, we are not responsible for an individual's personal conduct. Beyond this, it is the company's policy not to comment on pending litigation and legal matters."

The lawsuit alleges that when Greer sent posies to his girlfriend in April, he was promised that the florist would send nothing to his home. But 1-800-flowers.com sent a discount coupon and a thank-you card to Greer's house.

Greer's wife saw it, called the company and was faxed the receipt, according to the lawsuit. On the receipt was the name of the woman who received $100 in gifts, invoiced as "Occasion: Love & Romance."

And the message on the card: "Just wanted to say that I love you and you mean the world to me! Leroy."

This receipt is attached to Greer's lawsuit, along with a handwritten note on the bottom of the page: "Be a man! If you got caught red handed then don't still lie."

Greer said Thursday that his wife included that note when she faxed the receipt to him at work.

"Yes, it was my conduct," Greer said of the relationship and the gifts.

And he accepted the florist's conduct, to a point. "The thank-you note was fine. It was sending all that information to my wife that's the problem," Greer said.

Greer said he expects this divorce to go through and to cost him a lot more than it would have before 1-800-flowers.com sent that fax.

Richard Alderman, a consumer law expert and University of Houston Law Center professor, said lawsuits against companies that break promises can have merit.

"But the real question here is are there any damages, is he entitled to anything?" Alderman said.

He said under contract law Greer has to show his damages were foreseeable. Under the deceptive trade practices law, he would have to show the florist made a promise it knew it wouldn't keep. And Greer would have to prove the divorce, if ever finalized, cost him more because of the fax.

As for sending flowers you want kept secret, Alderman said: "I'm a big consumer advocate, but in this case I'd have to go with caveat emptor" — let the buyer beware.

Serves him right! And I hope the court throws out his law suit.