The State Coincident Indices, published by the Federal Reserve Bank of Philadelphia, have been released through the month of August. The top graph is from the month of May, which I've republished to provide some continuity from the previous set of graphs; the latter three graphs are for June, July and August.

As you can see, there has been some strengthening in the Gulf states of Texas and Louisiana (one wonders how the graphs will look after taking into account Hurricanes Gustav and Ike), the western half of the upper Midwest, and West Virginia, which went from deep red to dark blue in a matter of two months. Trouble spots include the Pacific Southwest and the Midwest, although the latter region may be improving; we'll have to wait and see.

The Federal Reserve Bank of Philadelphia has released the coincident indexes for all 50 states for August 2008. The indexes increased in 12 states for the month, decreased in 31, and were unchanged in the remaining seven (a one-month diffusion index of -38). For the past three months, the indexes have increased in 12 states, decreased in 35, and were unchanged in the other three (a three-month diffusion index of -46). For comparison purposes, the Philadelphia Fed developed a similar coincident index for the entire United States. The Philadelphia Fed’s U.S. index was flat in August and has remained unchanged over the past three months. 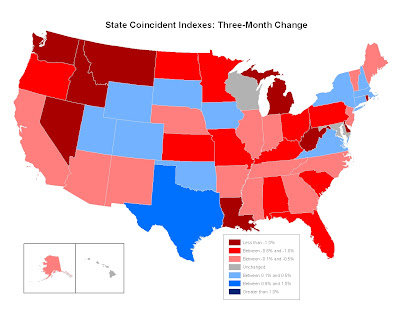 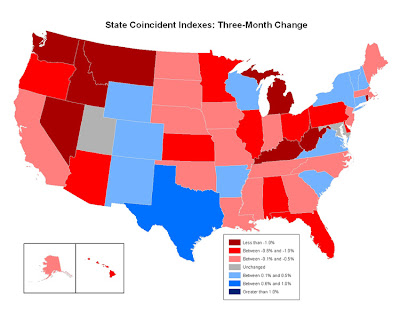 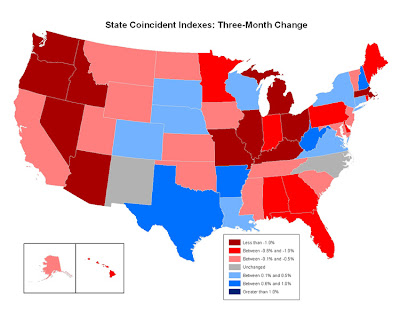 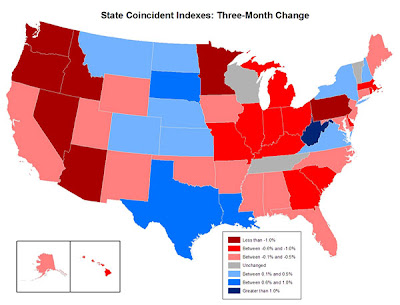