Time: Updating the Mosque for the 21st Century 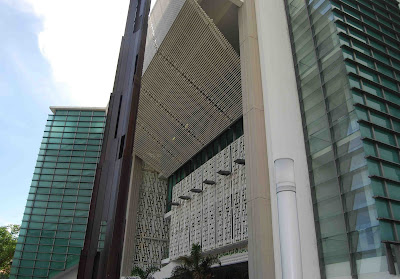 A couple days ago, I ran across a Time magazine article on how modern masajid are changing architecturally. Although the article mentions various masajid around the world, including Masjid Assyafaah above (in transliterated Arabic, Ash-Shafaah), located in the Sembawang neighborhood of Singapore, most of the discussion focuses on the controversies surrounding various proposed masajid in Europe.

One line in the article is bull$#|+, though, where a criticism about minarets is reported: "But they cost a lot, and there are others who argue that [economically,] they're a luxury Muslims can't afford." Minarets are NOT a luxury. They may add to the cost of building the masjid, they may even be unnecessary, but the same criticisms also apply to church steeples. This argument is motivated solely by the Islamophobic desire to make a masjid look like any other secular building. Considering that masajid are normally built with all of the money raised before construction even begins, the notion that Muslims can't afford the "luxury" of one or more minarets is completely false.

One other comment: although there is a very nice (and large) picture of the interior of Masjid Assyafaah in the print edition of Time, the website version of the article omits all but one of the photographs, using only a picture taken from the new Turkish mosque, Masjid Sakirin. However, the above photo of Masjid Assyafaah is my own picture, taken in October 2007, and shows the front of the building. The tall dark brown structure in front is the masjid's minaret.

Some quotations from the article:

A new generation of Muslim builders and designers, as well as non-Muslims designing for Muslim groups, often in Europe or North America, are updating the mosque for the 21st century, sparking not just a hugely creative period in Islamic design, but one riven by controversy. The disputes over modern mosques echo larger debates taking place in the Islamic world today about gender, power and, particularly in immigrant communities, Islam's place in Western societies. Even the simplest design decision can reflect questions that are crucial to Islam and its adherents: Should women be allowed in a mosque's main hall or confined to separate quarters? Are minarets necessary in the West, where laws on noise levels mean they are rarely used for the call to prayer? What should a mosque attended by Muslims from different parts of the world look like? The boldest of the new mosques try to answer such questions but are also powerful statements of intent. "Islam wants to proclaim itself," says Hasan-Uddin Khan, an architecture professor at Roger Williams University in Rhode Island. "These new mosques are saying, 'We are here, and we want it to be known that we are here.'"

As Muslims get wealthier, more confident and more geographically diffuse — almost a third of the world's 1.3 billion Muslims live in non-Muslim-majority states — their mosques are no longer just monuments to the rulers whose names they bear. Increasingly, they symbolize the struggle to marry tradition with modernity and to set down roots in the West. The most daring buildings are dreamt up by second- and third-generation Muslim immigrants, who have the confidence and cash to build stone-and-glass symbols of Islam's growing strength in places like Europe. Simply importing traditional mosque architecture "doesn't express loyalty to your current surroundings," says Zulfiqar Husain, honorary secretary of an innovative new eco-mosque in Manchester, England. "It almost expresses that you want to be separate from the society you live in."

The designers behind the best of the mosques take the opposite view: they may be making statements but they are also sensitive to local concerns and aesthetics. The mosque that Husain helps administer, in a gritty working-class Manchester neighborhood, uses reclaimed wood and solar panels on the roof to power its under-floor heating. Inside, peach carpeting and plasma TVs give the air of a prosperous suburban English home, while the prayer hall has carvings inspired by the 10th century North African Fatimid dynasty.

In Singapore, the architects of the Assyafaah Mosque, which was finished in 2004, cater to the country's multicultural population by creating an aesthetically neutral space, sleek and futuristic, where the island's Malay and Chinese Muslims can both feel comfortable.

[On the new masjid about to be built in Cologne, Germany:] His plan for the complex, due to be completed in 2010, calls for a piazza with a fountain and a cafe, designed to draw non-Muslims to the site. The local Muslim elders hope that, once there, visitors will browse in the library, check out the art gallery or spend in the shopping mall, which Böhm envisions as "a modern souk with the quality of the traditional souk." The mosque's prayer hall consists of shells of textured concrete connected by glass panels, to create "ideological and architectural transparency," says Böhm. Far from a nod to tradition, the minarets are a declaration that the building is "not a sports hall, a concert hall or a museum, but a mosque."

[On the newly built Sakirin Mosque in Istanbul Turkey, designed by Zaynep Fadillioglu:] Fadillioglu's women's section is an expansive balcony overlooking the central hall and divided only by crisscrossed railings. An airy and luxurious sensibility pervades the building. The facilities for pre-prayer ablution have blond-wood and Plexiglas lockers. In the main hall hangs a bronze chandelier, dangling with hand-blown glass raindrops — a visual allusion to the Koranic verse that says Allah's light should fall on believers like drops of rain. The mihrab, which indicates the direction of prayer, is tulip-shaped and turquoise — "an opening to God," says Fadillioglu.

Update: In the comments, "Anonymous" left a link to a BBC report about a masjid being completed in Istanbul, this being the first mosque designed in Turkey by a woman. (Both the designer and the masjid are mentioned in the Time article; in fact, this is the masjid that the online version of the article features in its sole photo.) As you can see in the video below, the masjid is quite beautiful, and will probably look even more spectacular, insha'allah, when the final touches (such as the carpeting) are done.

I haven't read the article yet, but wanted to comment on your thoughts on the luxury of the minaret.

"the notion that Muslims can't afford the "luxury" of one or more minarets is completely false."

Not really my friend.

When we were raising funds for expansion of our Masjid back in the US, there was a heated debate on whether we really needed the minaret and dome. One side argued that since we don't have the proper funds, we shouldn't bother with such a 'luxury' since it served no practical purpose, while the other believed it to be very integral to the cultural history of a masjid.

Personally, I sided with the functional argument feeling that money was better spent on real needs such as the youth group or the school.

I personally think there should be more mosques built in the Malay style in Singapore. There are few of them, but good examples that I know of are the Darul Aman and Kampong Siglap masjids. I think it's a pity that when building the Darul Quran extension to Masjid Kampong Siglap, they opted to go with a more "modern" design. My own feelings regarding mosque aesthetics.

I don't believe that a minaret and dome are necessities for a masjid, but I don't believe that they're necessarily a luxury either. One of the first mosques I attended back in Arizona was a tiny converted building that one would never know was a masjid unless you saw the semi-hidden sign on the front fence. Likewise, there's a masjid here in S'pore that's actually located underground, in the basement of an office tower. Obviously no dome or minaret there. ;) But I also don't think that arguing against the building of a dome or minaret in favor of youth groups and schools necessarily means that the former are luxuries. It is a recognition of both limited funds and various priorities. I think your masjid has made the decision that the dome and minaret are ultimately necessities, if only deferred in their construction. Personally, I probably would have argued with the cultural argument ;) , even though, as an MBA, I know it's better to have the minaret-less masjid than no masjid at all.

As an expat I like the variety of styles of masajid here in S'pore. The Malay style can be very nice as it seems to be more in tune with the climate; ironically, of the three masajid you named, I haven't been to any of them, although I've passed by Darul Aman a million times. :P I only heard about the Darul Qur'an extension for the first time a week ago, so I haven't had the chance to see it yet.

Of the Malay-style masajid (or what I would think of as being Malay-style), I like Masjid Abdul Hamid (near the IRAS building), Masjid At-Taqua (south of Tanah Merah MRT), and Masjid Abdul Aleem Sidique (south of Kembangan MRT). I also like Masjid Al-Abrar in the Central Business District because, for an older mosque, the lack of walls really captures the breezes and sunlight in the afternoon.

@ Anonymous: Yes, that is the masjid and the woman designer mentioned in the Time article. Very beautiful mosque.