Classic. You're a damn fool if you believe anything John McCain says about the economy. From Economist's View:

Here's John McCain's big plan for the budget: make a whole lot of noise about eliminating of the piece of the budget pie representing earmarks (and remember that most earmarks simply mandate where monies will be spent, they don't create any new spending):

[Note: The OMB estimates earmarks to be 16.9 billion in 2008. Current federal expenditures for 2008 are not yet available, so the chart uses the 2007 value of 2880.5 billion from the BEA (the ratio is approximately one half percent, i.e. 0.59%). Since federal expenditures for 2008 will exceed those of 2007, this means that the area for earmarks shown in the diagram is overestimated, i.e. it is larger than the true value. The NY Times also notes that "earmarks ... make up less than 1% of the federal budget."].

All the recent controversy over McCain lying about Palin's earmark requests, as he did most recently on The View, is noteworthy for what is says about McCain's (lack of) character, but more generally it is misdirecting us from more important issues. Earmarks are only a minor part of the overall budget, and issues such as health care reform are much more important since rising health care costs will absolutely dwarf any savings from earmarks.

Here's the centerpiece of McCain's economic plan: drill for oil, then pretend like it will help at the pump: 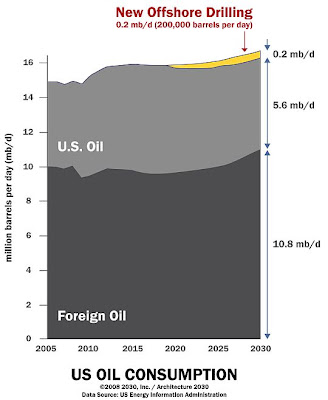 [via]
I can't even see the sliver of yellow until after 2015, and even after that it's not much of a contribution. That's supposed to lower gas prices?

With such a solid foundation for the policy proposals - a couple of slivers of pie - I can't imagine why the McCain campaign would resort to lies, deceptions, misdirection, and misleading characterizations to sell these "big" plans.

My plan for the energy crisis would be to convert all coal fired power stations to nuclear, and convert the coal saved to motoring fuels via the Fischer-Tropsch process (as the oil-starved Germans did during WWII), but using nuclear reactors for the process heat.

Once this is in place, research should be heavily funded to make extraction of atmospheric CO2 more efficient, so that it could replace the coal as a carbon source and make the process fully carbon-neutral.

The wind/solar fad is very dangerous, as these intermittent power sources must be backed up by natural gas power (unless you're lucky enough to have ample hydro power). Coal and nuclear cannot be used for this backup role as they cannot throttle up quickly enough.

The idea of converting coal-fired plants to nuclear power I don't think could ever work: they're completely different technologies. Moreover, you'll find some coal-fired plants (especially in the western US) to be in sites completely unsuitable for nuclear power sites, the lack of a significant water source being the biggest obstacle. Palo Verde, which is the largest NP plant in the US (and located west of Phoenix, where I lived) is the only NP plant in the world that isn't located near a major source of water, using waste water from local cities instead. A lot of those western coal plants are out in the middle of nowhere with very little water available (but relatively close to the coal mines, which is why they're there).

The extraction of atmospheric CO2 is an interesting idea; I don't recall ever hearing anyone suggest that before. As for wind/solar being a "very dangerous" fad, the real problem for these technologies is that they provide only a small fraction of the electricity that other facilities (especially NP) can generate. I think they should be strongly encouraged, while recognizing their limits.

The idea of converting coal-fired plants to nuclear power I don't think could ever work: they're completely different technologies.

It wouldn't work with the PWRs that currently make up the vast majority of American nuclear reactors, but the British AGR was specifically designed to be compatible with turbomachinery developed for coal power plants.