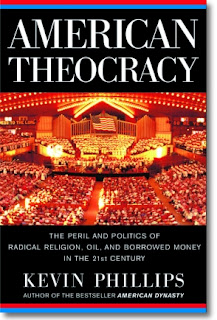 The past two weeks or so, I've been reading Kevin Phillips' American Theocracy, subtitled, "The peril and politics of radical religion, oil, and borrowed money in the 21st century." (When he refers to "radical religion," he's not talking about Islam but protestant Christianity in the mold of the Southern Baptist Convention, and other fundamentalist and evangelical Christian churches.) The book is a very sobering indictment of American politics and culture, suggesting that a convergence of three problems that face the U.S. (and that the Republican party have embraced) may very well lead to America's "fall from grace," a fall which is largely avoidable but that Americans have set themselves up for.

The following passages came from the last chapter of the book.

One can only imagine the private conversations - the blunt economic language - in the conference rooms of Asian financiers and exporters, each group as confident of its contingent's coming hour as executives in Manhattan and Chicago circa 1919 were of America's: "Why don't the Americans take care of their industry and invest in it? Why do they dither over primitive and antiscientific religion? Why are their children so far behind our own students? Why can't they cut back on their foolish and unaffordable overconsumption of oil? How far can we - should we - support them?"
p. 360


To policy makers elsewhere in the world, Washington's espousals of these priorities in the American South is one thing; pushing them globally is something else. These gender and sex-related postures have gone hand in hand with opposing the Kyoto Protocol, embracing a concept of unilateral preemptive war, declining to accept the jurisdiction of the International Criminal Court, and appointing as the U.S. ambassador to the United Nations a man such as John Bolton, whose previous attacks on the world body - some admittedly justified - bore a more polished resemblance to the name calling in the Left Behind series.

Realistically, these events and circumstances hardly encourage foreign central bankers, diplomats, or political leaders to buy and hold U.S. Treasury bonds, support American energy profligacy, join U.S. ventures in the Middle East, or believe that young people unskilled in mathematics, addled by credit cards, and weaned on so-called intelligent design instead of evolution will somehow retool American science for another generation of world industrial leadership. Dismissing global opinion is easy in Idaho or suburban Houston, but in the world beyond the GOP core constituencies, such attitude keep exacting a price.
pp. 370-1


First, put in one column the earlier estimates as to when China might or might not start to catch up with and even pass the United States in gross domestic product [various estimates mentioned in the book place China passing the U.S. by the years 2034-2040]. Next to that sequence put a middle-range forecast for several decades - the 2010s, probably - when global oil production outside OPEC might peak. In the next imaginary column, visualize two related trend lines - the cost of oil per barrel and the annual expense of the growing amount of oil and gas the United States will have to import. The adjacent column should list the prospects over the next fifteen years for the U.S. current account deficit - and one column beyond that, the reader can mentally jot down the unfolding prospects for the U.S. dollar during the same stressful and high-powered time frame.

Beyond these, of course, it will also matter what happens to Social Security, Medicare, the federal budget deficit, and the various tabulations of U.S. public, private, and total credit-market debt. The 2010s could easily be a very troubled decade, and the 2020s after them. Many cautionary time frames are converging just at a time when the political leadership of the United States - much like that of past leading economic world powers in their later days - is not in the most competent hands.
p. 382
Posted by JDsg at 4/24/2007 02:43:00 PM

Interestingly, I picked up this novel yesterday on my business trip. It has been quite an interesting read.

Being that I myself am in the oil industry, I am a bit more skeptical than most people about the oil conspiracy, but its tough to argue with the author on this one.

P.S. Don't know if you have visited muslimmatters.org yet... if you haven't, stop by. If you like it, pls add us to your blogroll.