The McMullen Museum of Art at Boston College is presenting an exhibit of Islamic Art called Cosmophilia, from the David Collection, Copenhagen, from September 1 through December 31, 2006. (Note: Details from each of the following photos can best be seen at the McMullen website. Click on the category titles to go to the individual webpages.) 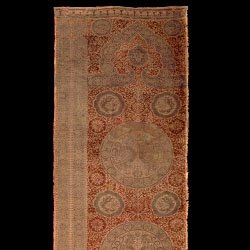 Cosmophilia (literally "love of ornament") is an exhibition comprised of 123 of the finest examples of Islamic art from the C. L. David Collection in Copenhagen, Denmark. "Islamic art," a term coined by Orientalists, refers not only to the arts made for the faith of Islam, but also to all arts created in lands where Islam was the principal religion. Ornament is one of its most characteristic features, as can be seen from the objects in this exhibition. The works presented incorporate the full array of Islamic art from its origins to modern times, representing vast spans of time (seventh-nineteenth centuries), space (Western Europe to East Asia), and media (textiles; ceramics; metalwares; carved ivory, wood, rock-crystal and stone; parchment; and paper). Rather than the typical organization by chronology, place of origin, function or technique, these works are presented visually to reveal how artisans in the Islamic lands explored four major themes of decoration. 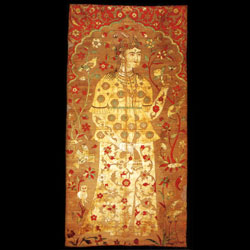 Many people think that Islam prohibits figural representation, but this is not true. The Koran, the Muslim scripture, bans idolatry, or the worship of images, so images are not found in mosques and other religious settings. But many Muslims—like people everywhere—enjoyed pictures of people and animals in their everyday lives. Sometimes figures are shown realistically, as in this beautiful velvet from seventeenth-century Iran or India, inwhich an elegant lady sniffs a flower in a garden surrounded by birds and animals. in other cases, the figures are more abstract, making it possible to interpret the representation in several different ways. 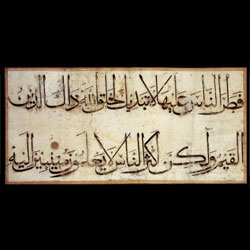 The central miracle in Islam is the Koran, which Muslims believe was revealed in Arabic to the Prophet Muhammad in early seventh-century Arabia. Reverence for the word therefore became a primary theme of religious art, as artists endeavored to make the physical presentation of God's word as beautiful as its content. These two lines come from one of the largest manuscripts of the Koran ever made, a loose-leaf copy produced about 1400 for the congregational mosque built by the warlord Timur at Samarkand in Central Asia. Artists everywhere used verses from the Koran to decorate Islamic art and architecture, and the appreciation of beautiful writing led them to exploit the decorative potential of Arabic script by developing many styles to use in different media and contexts. 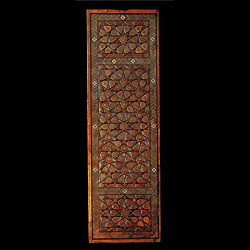 Artisans in the Islamic lands expanded the pre-Islamic repertory of geometric designs to create stunning compositions based on strapwork and tile patterns of triangles, squares, polygons, stars, and other regular forms. Many designs start from 45° or 60° grids that yield patterns of 8-pointed stars and hexagons, while others, such as this panel from a pair of seventeenth-century Iranian doors, are based on an extremely complex arrangement of pentagons and ten-pointed stars. Each individual element is made up of hundreds of minute rods of wood, bone, and metal that were glued together in other geometric patterns and then sliced to form tiles. Mathematicians in the Islamic lands were extremely sophisticated (algebra and algorithms, for example, were brought to the West by Muslim scientists), but artisans seem to have worked out most of these designs—even the most complex examples like this one—using traditional "tricks of the trade" without recourse to higher mathematics. 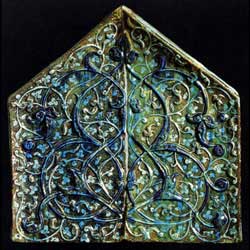 Artisans in the Islamic lands also inherited a rich tradition of decoration with vines, stems, leaves, and flowers. Vegetal ornament was used regularly and consistently in all the arts throughout the region. The depiction of lush vegetation and verdant gardens was undoubtedly attractive to the inhabitants of this dry and often dusty part of the world, and these designs may also have recalled the Garden of Paradise promised to Muslims in the Koran. Sometimes artists depicted gardens realistically, but their most distinctive achievement was the transformation of naturalistic vegetal ornament into the arabesque, an abstracted form in which plants and leaves grow according to the laws of geometry rather than nature. In these large tiles from the hood of a fourteenth-century Persian mihrab (the niche in the Mecca-facing wall of a mosque), for example, the vines and leaves grow in choreographed symmetry from a central source. 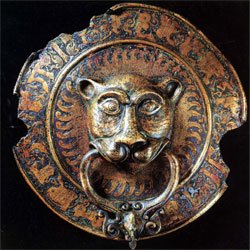 Artisans often combined these four themes within single works of art. This stunning doorknocker, probably made in southern Italy around the year 1100, for example, takes the shape of a lion's head which grasps a cock-headed ring in its maw. His mane is geometricized into a flame-like halo, and the whole composition is surrounded by an Arabic inscription set on a vegetal ground. The inscription, written as if the lion itself were speaking, states "I attest that there is no god but God and that Muhammad is His prophet." The inscription is thus a visual pun, written so that when the cock's head strikes the plate, it is as if the lion were roaring forth, attesting to his faith in Islam.

Curated by Sheila S. Blair and Jonathan M. Bloom, Cosmophilia was organized by the McMullen Museum of Art, Boston College in collaboration with the David Collection, Copenhagen. Major support has been provided by the Calderwood Charitable Foundation, the National Endowment for the Arts, and the Patrons of the McMullen Museum. The exhibition is dedicated to Norma Jean and the late Stanford Calderwood, who did so much to foster the study of Islamic art at Boston College. This exhibition is supported by an indemnity from the Federal Council on the Arts and the Humanities.
Posted by JDsg at 8/30/2006 02:30:00 PM