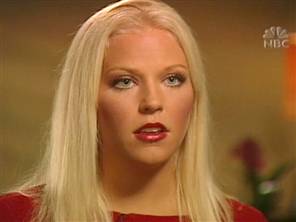 America's favorite sex offender, Debra LaFave, is back in the news, this time after being interviewed by NBC's Matt Lauer. A portion of the interview was broadcast on Today, and the full interview was scheduled to be shown on Dateline.

Some of the interview transcript (from Dateline's story, "Matt Lauer Sits Down with Debra Lafave"):

Why she garnered so much attention
LaFave: I don't know.

Lauer: I'll say it. Do you think it's because you're pretty?

LaFave: I think so. And sex sells.

How the affair began
LaFave: I think he just became very flirtatious and you gotta remember that at that period in my time or in my life, I didn't feel like an adult. I was crashing fast.

Lauer: I would imagine there are parents watching right now Debbie and they're saying, “Wait a minute. She just said that he became very flirtatious.” You know, a) is she blaming him for how this started? So the answer to that is?

LaFave: I did. I crossed the line that never should've been crossed.

Her lack of consciousness during this time
Lauer: Did you and this student have open conversations about the fact that you two might be getting into very dangerous territory?

LaFave: You know, there was very little conversation, to be honest with you. You know, looking back, he was 14, you know what is there really to say to a 23-year-old ...

LaFave: No. I never said that.

How she thinks this may impact her victim's life
LaFave: I think he's gonna have a hard time trusting women one day. I'm sure he has to be living with the guilt of quote, unquote ratting me out.

Being bipolar
LaFave: I don't want to blur the lines between doing something as heinous as what I did, and being bipolar. But, yes, symptoms of bipolar [disorder] definitely contributed to my mind frame. 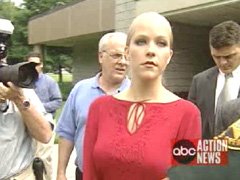 Lauer: You don't see yourself as a predator?

LaFave: It's hard. It is so hard because I lived 23 years of my life, you know, knowing who I was. I was a kindhearted person who loved children, who would never, you know, do anything to break the law. I was a good person. And then now everything has just changed. So it's just really hard for me to accept that.


Other quotations from the interview:

LaFave: He wanted it and, yeah, I gave it to him.
Lauer: Weren't you scared to death he would tell someone?
LaFave: Obviously not, because I did it again.
Lauer: And again.
LaFave: And again.

"She said that when she was 13 years old and in eighth grade, she was raped by someone she knew. Lafave said that [an] early, abusive relationship with an older boy forever shaped her view of sex. 'I kind of developed this idea that it was my role, in order to make a man, guy, boy happy, I had to do my part, which was pleasing him in that way,' she said."

"I'm not trying to give excuses," she said. "All I'm being is truthful. I'm going to be the first person to say, 'Yes, it's my fault,' and I'm dealing with that."

Lafave is serving three years of house arrest and seven years of probation after pleading guilty to having sex with the boy in a classroom and her home in June 2004.